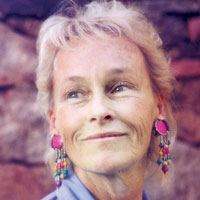 Susan Lang is the author of a trilogy of novels published by University of Nevada Press about a woman homesteading in the southwestern wilderness during the years 1929 to 1941. The first novel in the trilogy, Small Rocks Rising, won the 2003 Willa Award, and she was awarded a 2008 Project Grant from the Arizona Commission on the Arts for her novel-in-progress, The Sawtooth Complex. Lang’s short stories and poems have been published in magazines such as Idaho Review, Red Rock Review, Iris, and The Raven Review.  She founded and directed the Southwest Writers Series and Hassayampa Institute for Creative Writing at Yavapai College. Currently, Lang is Faculty Emeritus at Yavapai College, teaches courses at Prescott College, and serves as Event Coordinator at the Peregrine Book Company in Prescott, Arizona.

Susan Lang's books are available at the Peregrine Book Company. Order by phone (928) 445-9000 or come by the store. Requests for personalized copies are always welcome. Signed books make great gifts!

In God's Trailer Park  is an unforgettable novel that, with tenderness and humor, depicts the nitty-gritty lives of residents of a small Mojave Desert town. The story is bursting with indelible characters: Social worker Charlotte Sall does her best to plug up holes in the dam holding back the flood of poverty miseries threatening to inundate her clients' lives-all the while dealing with issues that arise with her own children. Recently widowed with a seven-day-old baby, Linda Farley, stubbornly persists in finding work, determined not to let a flood of bad fortune drown her and her young children. Waitress Alice Landers tries her best to protect her schizophrenic son from himself. All of these and other quietly heroic characters find themselves somehow entangled in the mysterious disappearance of a newborn belonging to one of the residents. These stories touch the hearts of readers lucky enough to pick up this novel. The diverse ways the characters face down their hardscrabble lives gives a vision of hope to us all.

The Sawtooth Complex  is a fascinating novel that deals vigorously with the dilemmas of human life on the planet. Our willy-nilly destruction of the exquisite natural world is set against the efforts of some people to protect and care for the biology that sustains us. Most characters are torn by contradictions, both personal and political. A few are avid developers; others seek a balance between humanity and nature. Several touching love stories develop and falter among them. The true hero, Maddie Farley, is an inspiring and reluctant monkey-wrencher who lives most closely to the earth. The natural world she inhabits is invoked with poignant accuracy and love. Ultimately, nature itself blows up everyone’s world in a startling forest fire that overpowers the land and the people, laying waste to most everything. The writing about this thrilling climatic event is terrifying, spellbinding, very intense and powerful. And then a miracle occurs. In the wreckage left behind, the author, who is no sentimental idealist or doomsday prophet, finds reason to hope. The story is engrossing, entertaining, and really makes us think. It’s a fine addition to our best environmental and human–humane–literature.

Small Rocks Rising   In 1929, Ruth Farley, a fiercely independent woman, homesteads a tract of land in a beautiful canyon in the Southern California desert. Determined to live on her own terms and to be free of troubling human attachments, Ruth initially rejects the help of the miners and cowboys who are her neighbors and struggles to develop the homestead on her own. Gradually, however, Ruth learns that survival is a far more complicated and dangerous business, and the entrapments of love sweeter, and more binding, than she had ever imagined. Determined to take possession of her land, Ruth must first face the consequences of her own stubbornness and sensuality, and of mindless and terrible violence, as well as a bitter fight to stay alive through a harrowing and isolated winter. Only then, her hard-won wisdom forged in unbearable grief and wrenching physical trials, can she truly become part of the land she loves so intensely. Ruth Farley is a character of exceptional complexity—a liberated woman in a time when most women were tied to the home; a joyously sexual woman in a culture where most women merely "did their duty" for the men in their lives; a contradictory, self-centered, alienated woman who ultimately learns the true nature of love and community. Glory Springs, the site of Ruth's homestead, is a place of wondrous natural beauty; it is also, as we follow Ruth's tenuous search for peace and wisdom, a place that we recognize, that we, too, seek within our hearts. Small Rocks Rising is a novel of stunning richness and beauty, of memorable characters and unforgettable insight into a woman's secret and passionate soul.

Juniper Blue  This engrossing novel by acclaimed author Susan Lang continues the saga of Ruth Farley, the fiercely independent young woman who was the protagonist of Small Rocks Rising, published by the University of Nevada Press in 2002. Ruth is still on her homestead at the end of a rugged canyon in California’s Mojave Desert, still struggling to survive on her own and to recover from a brutal rape and the murder of her lover. Now she must also face the responsibility of motherhood. The ensuing story expands Ruth’s world to encompass the panorama of Depression- era Southern California—miners and ranchers hanging on until times are better; Indians trying to preserve their ancient culture and identity; Okies, vagrants, and breadlines; the wealth and glitter of the movie industry; and narrow-minded small-town gossips. Ruth’s life also expands as she adjusts to motherhood, trying to maintain her autonomy and isolation and trying to preserve the tenuous web that links her to the seductive ruthlessness of the desert and to its ancient people and their wisdom. Ruth is one of the most engaging characters in recent fiction, complex and contradictory, stubborn and vulnerable, passionately in love with her austere desert home. Lang tells her story, the saga of a fully modern woman seeking her own identity and destiny against the turbulent, colorful setting of the rapidly changing twentieth-century West.

Moonlily   Ruth Farley is a stubbornly independent, free-spirited woman who homesteaded a piece of land at Glory Springs, deep in a beautiful, remote canyon in the Southern California Mojave Desert. At the end of the 1930s she is still there, raising her two children and struggling to preserve her solitude. But the world is intruding. Her Indian friend Martha has been arrested for a murder she didn’t commit, and Ruth must join the Yuiatei tribe in trying to free her. In this final volume of Susan Lang’s Ruth Farley trilogy, Ruth discovers the limits of her autonomy and struggles to make peace with her painful past. As the story comes to a dramatic conclusion and the world descends into the madness of another war, Ruth finally understands that she is inextricably part of the human community and that her hard-won independence will not be sacrificed if she accepts and cherishes the bonds of love and friendship. Ruth Farley is one of the most memorable characters in recent fiction, a perplexing, sometimes exasperating, and utterly sympathetic modern woman torn between her desire for freedom and her need for love, her determination to live life on her own terms and the pressures that society places on a single woman. In this trilogy of novels, Susan Lang has achieved her place among our best contemporary fiction writers.