Saturday, September 11th | 4 pm *Outside, across the street from the Peregrine* 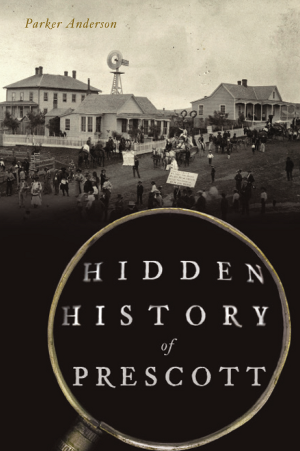 Join us for an outdoor in-person event with Prescott Historian, Parker Anderson, under the tree arbor across the street from the Peregrine bookstore at 4pm on Saturday, September 11th. Parker Anderson is an Arizona native and a recognized historian in Prescott. He has authored the books Elks Opera House (with Elisabeth Ruffner), Cemeteries of Yavapai County, Grand Canyon Pioneer Cemetery, Wicked Prescott, Haunted Prescott (with Darlene Wilson) and Arizona Gold Gangster: Charles P. Stanton, as well as two self-published books, Story of a Hanged Man and The World Beyond. He also authored a number of Arizona-themed history plays for Blue Rose Theater in Prescott.In addition, Parker Anderson serves as President of PAAHC, the Prescott Arts and Humanity Counsel.

Anderson digs a little deeper into the past of the “First Capital of Arizona Territory,” and it's history already rife with colorful characters and notable events. The growing town included members of the Yavapai Tribe, early inhabitants whose reservation was established in 1935, and Chinese immigrants, who were rumored to have built an entire network of underground tunnels. Fraternal organizations and secret societies sought to wield influence over the community, including the Masons, who held their first meeting in 1865. Explore the origins of the controversial Smoki People and the rise and fall of the Prescott Rifles, a short-lived vigilante group. Local readers will especially enjoy the colorful, well-researched chapters on the history of the Smoki, The Chinese in Prescott, the 19th Century vigilante groups, and even UFO cults here in Prescott, all part of the fascinating past of this unique town.

Lot Across from the Peregrine Book Company