The Gospel According to Billy the Kid is a novel narrated by Bill Roberts, who claimed to be Billy the Kid. Bill Roberts was a real person. The stories he told in 1949, nearly 70 years after the historical Billy the Kid was supposedly killed, included much new information about Billy the Kid that later turned out to be true. Roberts provided enough compelling evidence for his claims that some Billy the Kid scholars believe he was who he said he was. 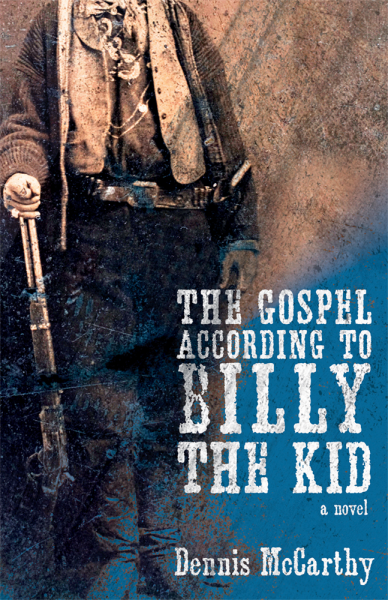 Like many good stories of the old West, this one begins in a saloon. In 1914 in El Paso, Texas, two strangers strike up a conversation at the bar—Bill Roberts, a real-life figure who died in Hico, Texas, in 1950, and a former US Army scout whose brother knew Roberts by another name: Billy the Kid.

So begins The Gospel According to Billy the Kid, a tale of the old New Mexico territory, corrupt lawmen, honest ranchers, murder, betrayal, and the explosive events of the Lincoln County War that sent young Billy off seeking justice—and headed toward a bloody rendezvous with a sheriff hired to track him down. In the saloon Roberts has us imagine another story, told thirty-three years later over shots of whiskey, about a young outlaw given a second chance to find himself, to find peace, and to finally grow up and out from under the shadow of his own infamy.

Dennis McCarthy has been a park ranger, ecologist, speechwriter, editor in chief, professor, and attorney. At work on his second novel, he and his wife and beagle live in Santa Fe, New Mexico

*A zoom link will be posted in advance of this event

The Gospel According to Billy the Kid (Paperback)