Above: “A female River Otter stretches her legs in Oak Creek after two months of confinement in her den with her newborn kit, during which time her partner provided food for her.”  Photo By Ty Fitzmorris

March is an alluring month in the Mogollon Highlands, but ultimately a deceptive one. Glorious sunny days abound, glittering with butterflies and migrant songbirds, and highlighted with the earliest wildflowers and luminescent leaves. But March is also one of our wettest months of the year, and most of that moisture comes in the form of snow. Large storm systems over the Pacific Ocean throw off snowstorms that sweep into our area from the north, dropping anywhere from inches to feet of snow, and bringing us firmly back into winter.

Because of its trickster nature, March one of the more dangerous times for the creatures in the wilds. Many mammals are bearing young now. Some insects are emerging from creeks, as pupae or as winged adults. Birds are making nests or migrating back into the area from the tropics. The dramatic cold snaps can therefore cause many of these species severe temperature and food stress, and sometimes lead to their deaths.

In spite of the warm temperatures and sunny days, most of the native plants of the Highlands, with the exception of the wind-pollinated trees, refrain from growing and flowering. They will wait until the days are reliably warm and frost-free, each species determining this through a unique combination of day length, soil temperature, number of accumulated days of cold, and other cues. Non-native plants, such as fruit trees and ornamentals, have no such mechanisms, and flower as soon as temperatures and precipitation allow.

In the lower deserts, such as the western slopes of the Sierra Prieta mountains, the frosts have passed by now, and plants are emerging to greet their early hummingbird, butterfly, moth, fly, and native bee pollinators. The exuberance of spring is riotous in the deserts, and over the next several months it will climb up the riparian corridors and south-facing slopes into the Highlands.

In our high desert landscape, water scarcity is the factor that determines what happens more than any other single thing. But water scarcity can take different forms— too little falling as precipitation, or too little available to plants and animals at the right time of year. Water is useful to plants when it is liquid, and when air temperatures are high enough for plants to perform photosynthesis.

Much of the precipitation that falls in the Mogollon Highlands throughout the year is not able to be utilized by plants (or animals, for that matter) because the waterfalls in torrents, as in the monsoon season of late summer, and washes through the landscape in erosive floods, or because it falls in the form of snow, when air temperatures are too low for plants to perform photosynthesis.

Snow, however, proves to be the more valuable source of water for our region. This is because it melts slowly from north-facing slopes, saturating soils and filling rivers slowly but continuously. Long after the lowlands and southwestern slopes are warm enough for plant growth and flowering, patches of snow remain in the shadows of the mountains, providing this precious, scarce resource. And even though the last five years globally have been the warmest in recorded history, temperatures in the Mogollon Highlands have been near average for the last three months, so some patches of snow will likely persist in the high mountains. These snowbanks, aided by March snowfall, will help to bring the growth and reawakening of our resplendent spring.

Below: “A sleeping female digger bee (genus Anthophora) resting after emerging from her soil-nest, where she has waited through the winter.” Photo by Ty Fitzmorris 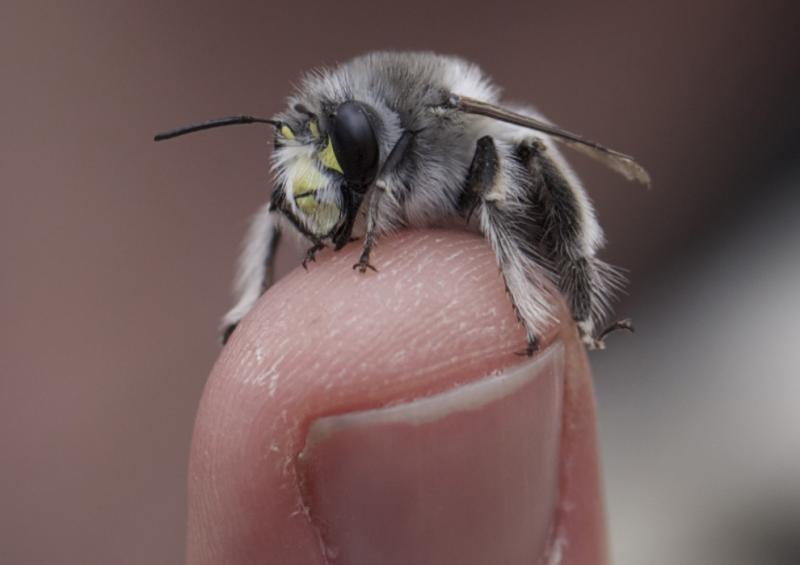 A Very Brief Survey of What’s Happening in the Wilds

Mountain chickadees move upslope as the temperatures rise, scrutinizing trees for insect larvae. As other bird species migrate through the region, they find the chickadee flocks, and forage with them before moving on.

Bobcats give birth to 2-8 kittens who will remain in dens until June.

The leaves of our several species of oak begin to change color and drop as the soft, new leaves replace them. This ‘spring fall’ usually begins somewhat later, but warm temperatures in our region have moved it earlier.

Our several species of manzanitas continue flowering, providing the first major pollen and nectar crop for native bees, moths, and flies. Look especially for the stunning iridescent manzanita mason bee (Osmia ribifloris), which flies for the next several months. Like the vast majority of bee species, these bees are solitary, and do not live in colonies or hives. Their populations are declining due to the use of pesticides, along with the populations of many other species of bees.

Raccoon mating season is at its peak, and may be punctuated with loud, clicking nocturnal screeches as males fight over females.

Gray fox give birth to (usually) 4 pups in their dens. This furtive fox is the most common fox in the higher Mogollon Highlands, though it is rarely seen. Gray foxes are unusual in that they can climb trees better than any other North American canid, and have been seen as high as 60 feet up in trees. To climb, they grasp around the tree with their front feet while pushing with their hind feet, and they can run head first down trees that are nearly vertical.

Female badgers dig birthing dens and line them with grasses. Here they will give birth to two to three cubs toward the end of the month. Badgers, which can live for up to 14 years, are rare in our region, but are important predators of rodents, including our ubiquitous pocket gophers, packrats, mice, rats, and prairie dogs. Where predators such as Badgers are hunted, rodent populations skyrocket.

Broad-winged hawks, such as Swainson’s, rough-legged, and ferruginous hawks, continue their migration through the open grasslands in our region, and can often be seen sitting on power-line posts, looking for rodents. During their migration tens of millions of hawks migrate from South and Central America to North America, and in one area in Mexico as many as 1.5 million hawks have been seen in one day during this season’s migration.

Northern rough-winged swallows and violet-green swallows return from their overwintering grounds in southern Mexico, the Yucatan Peninsula, and Guatemala. While some individuals continue north as far as Canada, many will stay in the Mogollon Highlands and begin breeding, nest construction, and egg laying.

River otters tend their newborn young in their dens while beginning their mating season.

Contrary to their name, mayfly swarms (order Ephemeroptera) fly from now through the summer above perennial streams. These swarms are short-lived, as the adult mayflies emerge, mate, lay eggs, and die, all within the space of a few hours. The aquatic larvae may have been alive for several years by this point, but the winged adult stage represents such a brief, though glorious, crescendo that they don’t eat at all, and in fact do not have usable mouthparts as adults. They can be identified by their long trailing tails and slow, fairy-like flight in bouncing clouds over the river surface.

Antlions (family Myrmeleontidae) construct their cone-shaped funnels in riverside sand. The creatures themselves are very difficult to see, as they remain buried at the base of their funnels, but they are the larvae of large, winged damselfly-like insects, and they are important predators of many species of ants. If an ants falls into an antlion’s funnel, the antlion flings sand outward, causing the ant to fall to the center and be captured.

Migrating warblers sweep into our region toward the end of the month, through riparian corridors. Look for yellow-rumped warblers heading the northward charge, followed first by orange-crowned, and later Wilson’s, MacGillivray’s, and black-throated gray warblers.

Black hawks (Buteogallus anthracinus), the rarest species of hawk in the US, return to the Mogollon Highlands to begin mating, nesting, and egg laying in the high cottonwood and sycamore trees of our riverine corridors. Leaf-buds burst now, revealing brilliant green leaves that provide cover for the black hawk nests. Black hawks have been known to catch fish by sitting on the shore and tickling the water’s surface with their wingtips until a fish investigates, at which point the hawk catches the fish with its talons.

Spring is in full regalia in the desert and lowlands, with extraordinary displays of wildflowers. Most ubiquitous are the yellow flowers of yellow and blue paloverde trees (Parkinsonia florida and P. microphylla) and creosote bush (Larrea tridentata), which line roads and the uplands along river corridors. Several species of pink-purple lupines, brilliant orange Mexican poppies, and the pink-red penstemons are also conspicuous now, as are hundreds of other, more uncommon species.

The abundance of spring flowers offers pollen and nectar to the amazing diversity of native bees in the Sonoran Desert, which has the highest bee diversity on Earth at over 1,000 species. Most of these are unstudied. The most conspicuous spring desert bees are the large black carpenter bees (genus Xylocopa) and the emerging queens of the sole bumblebee species, Bombus sonorus, though many smaller species can be seen by the patient observer.

In some years, the dayflying moth Litocala sexsignata flies in massive mid-day clouds of thousands in chaparral, while very few can be seen in other years.

Desert tortoises emerge from hibernation. Desert tortoises are one of only four species of tortoise in North America, and the most threatened. They can live 50 to 80 years, and consume grasses, cactus, shrubs, and wildflowers.