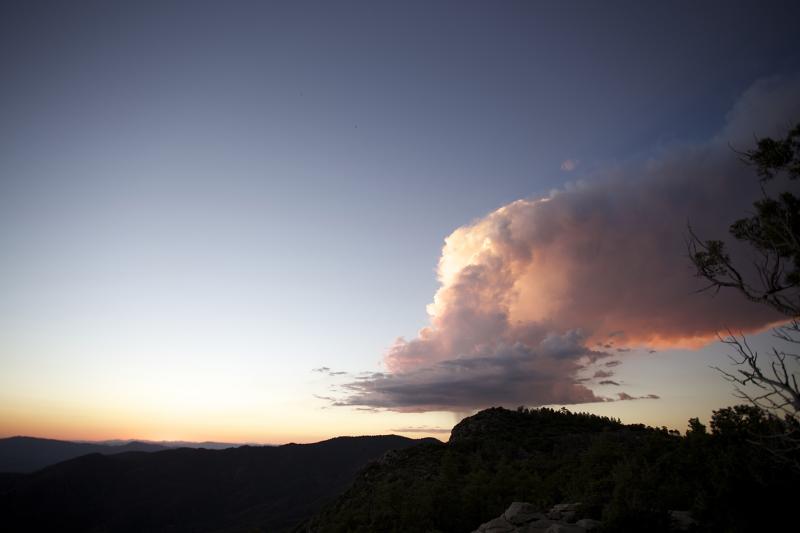 Periodically a monsoon storm will build to a large enough size to sustain itself into the evening, though these storm systems are much smaller than winter storms and dissipate easily.

August susurrates with storm and shower, woven into the cacophony of resonant thunder and the assonance of cicada song. In the high heat of summer, the monsoon rains turn the land to emerald, and it seems as though living things are everywhere. Many mammals are teaching their young to forage in this time of plenty, while young birds are on longer and longer forays away from their parents. Ectothermic animals, such as lizards and snakes, whose body temperatures are tied closely to ambient temperatures, are at their most active now, chasing insect and rodent prey, while insects, from the minute leafhoppers to the massive saturn moths, enter their time of greatest abundance.

The majority of woody plants bear their seeds during this season, including  Coffeeberry (Rhamnus californica), Chokecherry (Prunus virginiana), Apache Plume (Fallugia paradoxa), and all seven of our oak species. Many herbaceous (non-woody) plants are growing and flowering now, most of which are specialist monsoon plants and did not appear in the spring.  This is the time of plenty for many birds and mammals, as insects of all types proliferate, from giant moths to enormous strange and beautiful beetles, to dragonflies, who reach their peak now, while alien-like cicadas measure the day’s heat with their shrill cries. This second flowering brings with it a glut of insect prey, which sends a wave of life through our ecosystems—from the predatory insects to the lizards, birds, bats, and even terrestrial mammals. 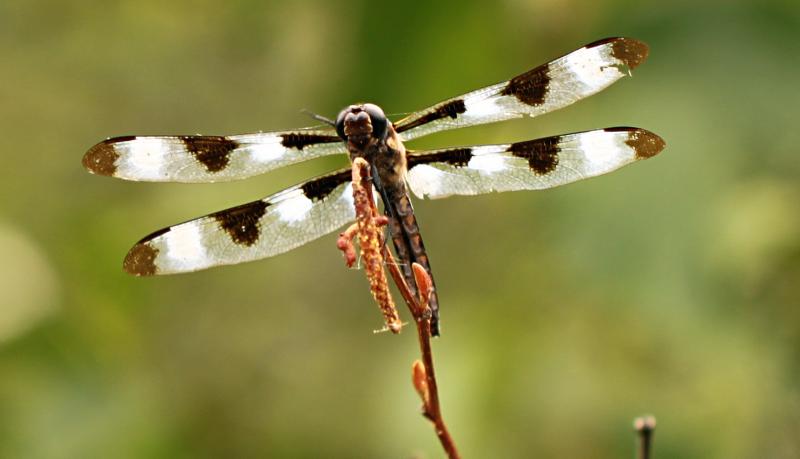 Among the insects August marks the beginning of the time of the giants.  Massive moths with 4-6 inch (and greater) wingspans, such as the sphinx moths, saturn moths, and the massive Black Witch Moth (Ascalapha odorata), which can have an 8” wingspan, fly for miles searching for mates, while Grant’s Hercules Beetles (Dynastes granti), Rhinoceros Beetles (Xyloryctes jamaicensis) and Longhorn Oak Borers (Enaphalodes hispicornis) bumble to porch lights and streetlights.  The Grand Western Flood Plain Cicada (Tibicen cultriformis) flies in large numbers, providing many species of birds and mammals with food, while all eight of our preying mantid species can be seen. The proliferation of giants happens now because their larger bodies have required longer to grow to their massive size and so have timed their metamorphism into their adult forms for this resource-rich time of the year, when both food and egg-laying sites are abundant.Twelve-spotted Skimmers (Libellula pulchella) patrol the monsoon creeks and pools for flies and other small insects.

During the day, butterflies, beetles, dragonflies, and damselflies are at their most prolific during the monsoonal season.  Many of the butterfly species out now fly only during this time of year, and the damsels and dragons are groups that are notably absent during the spring, though they are virtually everywhere now, from parking lots to lakes.  Our flagship monsoon butterfly is the Arizona Sister (Adelpha eulalia), which glides over riparian clearings near oak stands.  Look also for Buckeyes, Queens, Monarchs, and Pipevine and Two-tailed Swallowtails. In all, the wild diversity of living creatures this month is dizzying.

A very brief survey of what’s happening in the Wilds--

*Always consult with a trained professional before ingesting any part of a wild plant. This information is not intended to encourage the attempted use of any part of a plant, either for nutritive or medicinal purposes.