Growing Up With Tim Conway In The Funniest House In America. 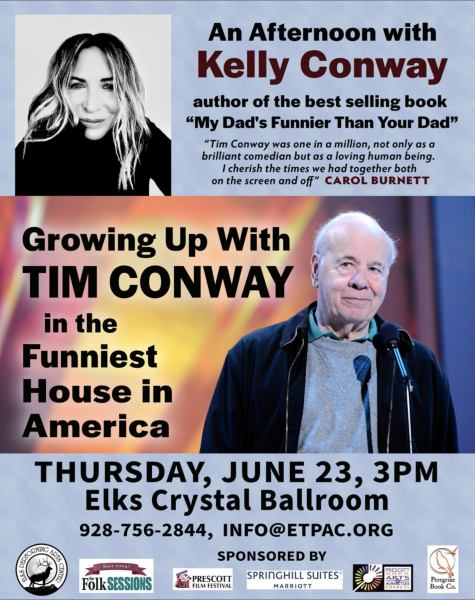 “Tim Conway was one in a million, not only as a brilliant comedian but as a loving human being.  I cherish the times we had together both on the screen and off.”  Carol Burnett

What was it like growing up “In The Funniest House In America”?  On Thursday, June 23th , Kelly Conway will share what it was like growing up with her dad Tim Conway – a man who was just as funny at home as he was on camera. Join Kelly for a humorous, loving and surprising afternoon of memories of growing up with a home life as riotous and engaging as some of her father's best-known comedy sketches.  Kelly shares an intimate look at a supremely American childhood, from the studios of Television City in Los Angeles to the Midwestern pleasures of her mom and dad's home towns.

The author of the best selling book My Dad's Funnier Than Your Dad will spend the
afternoon with you recounting the warm, laugh-filled world of her childhood when she
and her five younger brothers spent their days playing together within a protective
cocoon of affection and love.

The afternoon will be a touching and loving tribute from Tim Conway’s only daughter, a story of the love between a down-to-earth father and his devoted daughter.  Tickets start at $17 and are available at PrescottElksTheatre.org

My Dad's Funnier Than Your Dad: Growing Up with Tim Conway in the Funniest House in America (Hardcover)