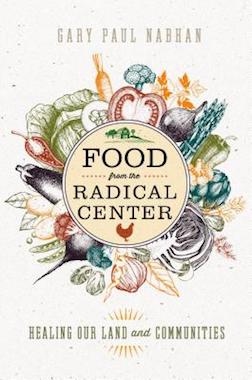 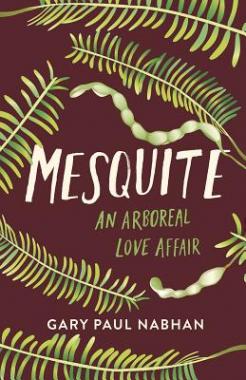 Join us at Natural History Institute for the Prescott book launch of Gary Nabhan's Mesquite: An Arboreal Love Affair (September 14, 2018 release) and Food from the Radical Center: Healing Our Land and Communities (September 27, 2018 release) Gary Paul Nabhan is an internationally-celebrated nature writer, agrarian activist and ethnobiologist who works on conserving the links between biodiversity and cultural diversity.

In his latest book, Food from the Radical Center, Gary Nabhan tells the stories of diverse communities who are getting their hands dirty and bringing back North America's unique fare: bison, sturgeon, camas lilies, ancient grains, turkeys, and more. These efforts have united people from the left and right, rural and urban, faith-based and science-based, in game-changing collaborations. Their successes are extraordinary by any measure, whether economic, ecological, or social. In fact, the restoration of land and rare species has provided—dollar for dollar—one of the best returns on investment of any conservation initiative. Nabhan’s most enduring legacy may be his message of hope: a vision of a new environmentalism that is just and inclusive, allowing former adversaries to commune over delicious foods.

In Mesquite: An Arboreal Love Affair, Gary Paul Nabhan employs humor and contemplative reflection to convince readers that they have never really glimpsed the essence of what he calls “arboreality.” As a Franciscan brother and ethnobotanist who has often mixed mirth with earth, laughter with landscape, food with frolic, Nabhan now takes on a large, many-branched question: What does it means to be a tree, or, accordingly, to be in a deep and intimate relationship with one? To answer this question, Nabhan does not disappear into a forest but exposes himself to some of the most austere hyper-arid terrain on the planet—the Sonoran and Chihuahuan deserts along the US/Mexico border—where even the most ancient perennial plants are not tall and thin, but stunted and squat. There, in desert regions that cover more than a third of our continent, mesquite trees have become the staff of life, not just for indigenous cultures, but for myriad creatures, many of which respond to these “nurse plants” in wildly intelligent and symbiotic ways. In this landscape, where Nabhan claims that nearly every surviving being either sticks, stinks, stings, or sings, he finds more lives thriving than you could ever shake a stick at. As he weaves his arid yarns, we suddenly realize that our normal view of the world has been turned on its head: where we once saw scarcity, there is abundance; where we once perceived severity, there is whimsy. Desert cultures that we once assumed lived in “food deserts” are secretly savoring a most delicious world. Drawing on his half-century of immersion in desert ethnobotany, ecology, linguistics, agroforestry, and eco-gastronomy, Nabhan opens up for us a hidden world that we had never glimpsed before. Along the way, he explores the sensuous reality surrounding this most useful and generous tree. Mesquite is a book that will delight mystics and foresters, naturalists and foodies. It combines cutting-edge science with a generous sprinkling of humor and folk wisdom, even including traditional recipes for cooking with mesquite. 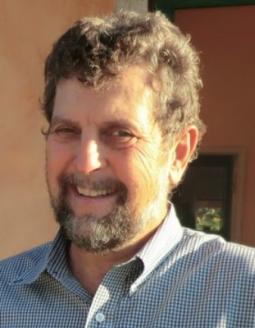 Gary Paul Nabhan (born 1952) is an Agricultural Ecologist, Ethnobotanist, Ecumenical Franciscan Brother, and author whose work has focused primarily on the interaction of biodiversity and cultural diversity of the arid binational Southwest. He is considered a pioneer in the local food movement and the heirloom seed saving movement.

A first-generation Lebanese American, Nabhan was raised in Gary, Indiana. While excelling in some of his studies, he dropped out of high school, and then had the opportunity to attend Cornell College in Mt. Vernon, Iowa for 18 months. During that time, he worked at the headquarters for the first Earth Day for two stints in Washington DC. He then transferred to Prescott College in Arizona, earning a B.A. in Environmental Biology in 1974, and has remained in-state ever since. He has an M.S. in plant sciences (horticulture) from the University of Arizona (1978), and a Ph.D. in the interdisciplinary arid lands resource sciences also at the University of Arizona. During this time he started working with, and learning from farmers and foragers in several indigenous communities on both sides of the U.S./Mexico border.

He co-founded Native Seeds/SEARCH while working at the University of Arizona, with both organizations co-hosting the first-ever national conference on community-based seed banks and heirloom seed saving. He is currently married to cultural ecologist and indigenous health activist Laurie Monti and lives in Patagonia, Arizona on a five-acre homestead to the southwest of Tucson. He farms a diverse set of heirloom fruit and nut varieties from the Spanish Mission era and from the Middle Eastern homelands of his Lebanese ancestors, as well as heritage grains and beans adapted to arid climates. Learn more about Gary Nabhan »