The Zoom link will be posted here a few days before the event. 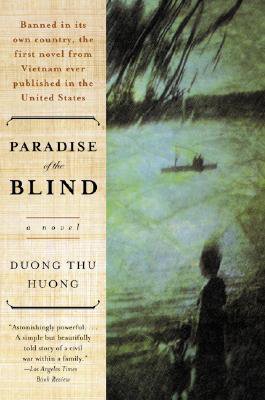 oin us for a reading and discussion of literary works of merit published from 2000 to the present. Novels will be chosen from texts that have won or been considered for awards like the Pulitzer Prize, Man Booker Prize, PEN/Faulkner Award, National Book Award, and others. Selections may also include novels that have been highly acclaimed by reviewers and literary critics. Check out our page on Meetup.com! The book for each specific month will be available at 10% off the listed price.
* Please Note: The 10% discount applies to books that are currently in print and available to bookstores.

This month we will discuss Paradise of the Blind by Duong Thu Huong.

Banned in Vietnam, Paradise of the Blind is an exquisite portrait of three Vietnamese women struggling to survive in a society where subservience to men is expected and Communist corruption crushes every dream. Through the eyes of Hang, a young woman in her twenties who has grown up amidst the slums and intermittent beauty of Hanoi, we come to know the tragedy of her family as land reform rips apart their village. When her uncle Chinh‘s political loyalties replace family devotion, Hang is torn between her mother‘s appalling self–sacrifice and the bitterness of her aunt who can avenge but not forgive. Only by freeing herself from the past will Hang be able to find dignity –– and a future.

Dương Thu Hương (b. 1947) is a Vietnamese author and political dissident. Formerly a member of Vietnam's communist party, she was expelled from the party in 1989, and has been denied the right to travel abroad, and was temporarily imprisoned for her writings and outspoken criticism of corruption in the Vietnamese government.

Born in 1947 in Thai Binh a province in northern Vietnam, Dương came of age just as the Vietnam War was turning violent. At the age of twenty, when she was a student at Vietnamese Ministry of Culture’s Arts College, Dương Thu Hương volunteered to serve in a women’s youth brigade on the front lines of “The War Against the Americans". Dương spent the next seven years of the war in the jungles and tunnels of Binh Tri Thien, the most heavily bombarded region of the war. Her mission was to “sing louder than the bombs” and to give theatrical performances for the North Vietnamese troops, but also to tend to the wounded, bury the dead, and accompany the soldiers along. She was one of three survivors out of the forty volunteers in that group. She was also at the front during China’s attacks on Vietnam in 1979 during the short-lived Sino-Vietnamese War. However, in the period after Vietnam’s reunification in 1975, Dương became increasingly outspoken and critical about the repressive atmosphere created by the Communist government. Upon seeing the conditions in the South – compared with the North – she began speaking out against the communist government.

Paradise of the Blind: A Novel (Paperback)