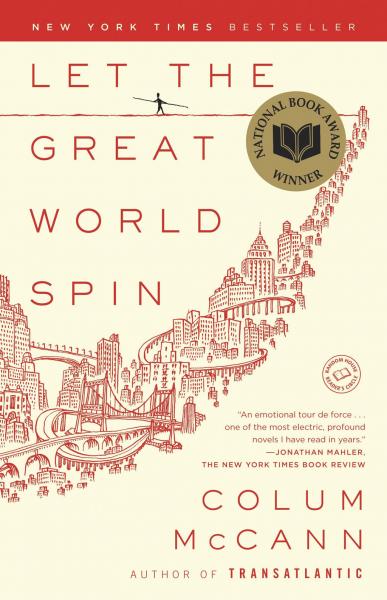 *This month's meeting has been cancelled. We will discuss "Let The Great World Spin" for June's meeting.* Join us for a reading and discussion of literary works of merit published from 2000 to the present. Novels will be chosen from texts that have won or been considered for awards like the Pulitzer Prize, Man Booker Prize, PEN/Faulkner Award, National Book Award, and others. Selections may also include novels that have been highly acclaimed by reviewers and literary critics. Check out our page on Meetup.com! The book for each specific month will be available at 10% off the listed price.
* Please Note: The 10% discount applies to books that are currently in print and available to bookstores.

This month we will discuss Let the Great World Spin by Colum McCann.

Let the Great World Spin is the critically acclaimed author’s most ambitious novel yet: a dazzlingly rich vision of the pain, loveliness, mystery, and promise of New York City in the 1970s. Corrigan, a radical young Irish monk, struggles with his own demons as he lives among the prostitutes in the middle of the burning Bronx. A group of mothers gather in a Park Avenue apartment to mourn their sons who died in Vietnam, only to discover just how much divides them even in grief. A young artist finds herself at the scene of a hit-and-run that sends her own life careening sideways. Tillie, a thirty-eight-year-old grandmother, turns tricks alongside her teenage daughter, determined not only to take care of her family but to prove her own worth.
Elegantly weaving together these and other seemingly disparate lives, McCann’s powerful allegory comes alive in the unforgettable voices of the city’s people, unexpectedly drawn together by hope, beauty, and the “artistic crime of the century.” A sweeping and radical social novel, Let the Great World Spin captures the spirit of America in a time of transition, extraordinary promise, and, in hindsight, heartbreaking innocence. Hailed as a “fiercely original talent” (San Francisco Chronicle), award-winning novelist McCann has delivered a triumphantly American masterpiece that awakens in us a sense of what the novel can achieve, confront, and even heal.

Colum McCann is the author of two collections of short stories and four novels, including "This Side of Brightness,""Dancer" and “Zoli,” all of which were international best-sellers. His newest novel “Let the Great World Spin” will come out in 2009. His fiction has been published in 26 languages and has appeared in The New Yorker, The Atlantic Monthly, GQ, Paris Review and other places. He has written for numerous publications including The Irish Times, Die Zeit, La Republicca, Paris Match, The New York Times, the Guardian and the Independent.