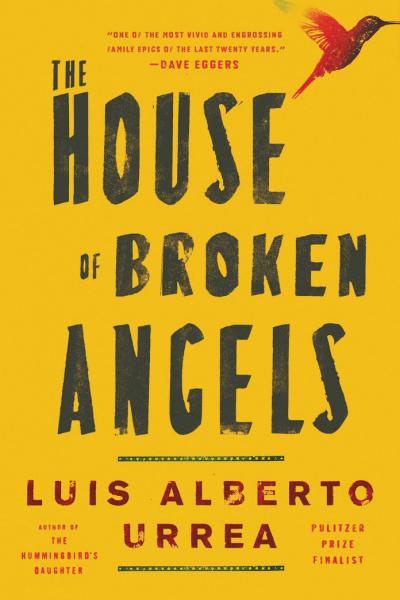 This month we will discuss The House of Broken Angels by Luis Alberto Urrea.

About the Book
The definitive Mexican-American immigrant story, a sprawling and deeply felt portrait of a Mexican-American family occasioned by the impending loss of its patriarch, from one of the country's most beloved authors.

Prizewinning and bestselling writer Luis Urrea has written his Mexican coming-to-America story and his masterpiece. Destined to sit alongside other classic immigrant novels, The House of Broken Angels is a sprawling and epic family saga helmed by patriarch Big Angel. The novel gathers together the entire De La Cruz clan, as they meet for the final birthday party Big Angel is throwing for himself, at home in San Diego, as he nears the end of his struggle with cancer and reflects on his long and full life.

But when Big Angel's mother, Mama America, approaching one hundred, dies herself as the party nears, he must plan her funeral as well. There will be two family affairs in one weekend: a farewell double-header. Among the attendants is his half-brother and namesake, Little Angel, who comes face to face with the siblings with whom he shared a father but not, as the weekend proceeds to remind him, a life.

This story of the De La Cruzes is the story of what it means to be a Mexican in America, to have lived two lives across one border. It is a tale of the ravaging power of death to shore up the bits of life you have forgotten, whether by choice or not. Above all, this finely wrought portrait of a deeply complex family and the America they have come to call home is Urrea at his purest and best. Teeming with brilliance and humor, authentic at every turn, The House of Broken Angels cements his reputation as a storyteller of the first rank.

About the Author
Luis Alberto Urrea is the award-winning author of 13 books, including The Hummingbird's Daughter, The Devil's Highway and Into the Beautiful North (May 2009). Born in Tijuana to a Mexican father and American mother, Luis has used the theme of borders, immigration and search for love and belonging throughout his work. A Pulitzer Prize finalist in 2005 (nonfiction), he's won the Kiriyama Prize (2006), the Lannan Award (2002), an American Book Award (1999) and was named to the Latino Literary Hall of Fame. He is a creative writing professor at the University of Illinois-Chicago and lives with his family in the 'burbs (dreaming of returning West soon!).