Join us for a reading and discussion with author and history professor Daniel Herman on The Feudist: A Novel of the Pleasant Valley War.

The Zoom link will be posted here several days before the event. 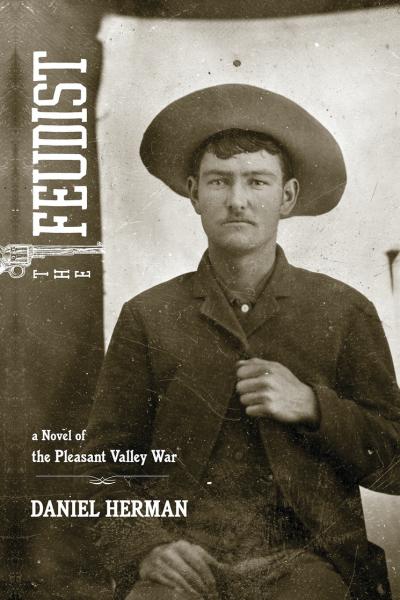 About the Book
The Feudist: A Novel of the Pleasant Valley War is both a traditional Western—tense, authentic, fast-paced—and an anti-Western that tells the story of what was perhaps the bloodiest range war in US history: Arizona’s 1880s Pleasant Valley War. Ben Holcomb, the narrator, begins the story as a stock boy in Globe City, Arizona. Bored with his job, he decides to become an apprentice cowboy. His journey to his future employer’s ranch leads him into a smoldering range war—and though Ben tries to stay out of the quarreling, he finds himself embroiled as he stumbles through passionate love, devastating loss, and moral uncertainty. Over the next year, he unwittingly joins the wrong side in a shootout, then later tries stop three murders—along the way taking the reader on a hair-raising midnight ride with a lynch party. He falls in love with the younger wife of a polygamous Mormon elder, witnesses the killing of a Mexican shepherd, and nearly dies himself before half-wittingly becoming an accessory to a revenge killing. Who are the heroes here, who the villains? Herman’s impressive research shows in his keen eye for historical detail and in the authentic voices of a broad cast of actors who are anything but one-dimensional, giving the novel a verisimilitude that transcends the genre Western and far surpasses Zane Grey’s 1922 romance about the Pleasant Valley War, To the Last Man.

“A classic coming of age tale set amidst the violence and despair of the Arizona frontier.  With authentic characters, fascinating situations, and spare prose, Dan Herman has delivered a wonderful western in the tradition of John Williams' Butcher's Crossing.”   John Mack Faragher, author of Eternity Street:  Violence and Justice in Frontier Los Angeles.

“ The story just sings … Herman’s dialogue is absolutely amazing.”  Melody Groves, author of She Was Sheriff; Ropes, Reins, and Rawhide: All About Rodeo; and the Colton Brothers series, among other books.

“Like Kelton's The Day the Cowboys Quit, The Feudist evokes historical realism and vitality that move the reader beyond mere facts to the pathos, pain, and complexities of the time. You'll enjoy the ride.” Richard W. Slatta, author of Cowboys of the Americas, The Cowboy Encyclopedia, and Cowboy:  The Illustrated History, among other books.

"Herman's mastery of the story and splendid prose style (to say nothing of his uncanny ear for Western dialogue) make this an enormously satisfying read."  Andrew Graybill, Co-director, Clements Center for Southwest Studies, author of The Red and the White: A Family Saga of the American West.

The Feudist: A Novel of the Pleasant Valley War (Paperback)