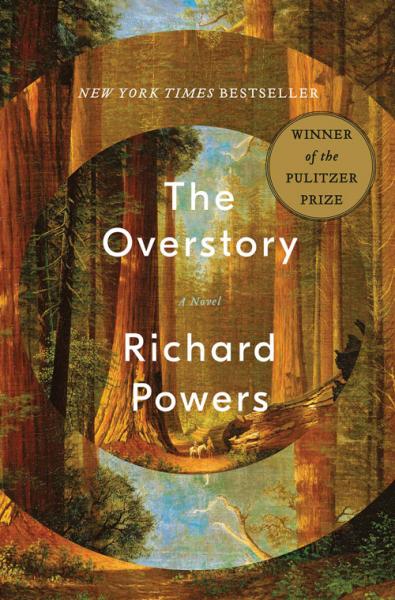 This month we will discuss
The Overstory by Richard Powers.

About the Book
The Overstory is a sweeping, impassioned work of activism and resistance that is also a stunning evocation of—and paean to—the natural world. From the roots to the crown and back to the seeds, Richard Powers’s twelfth novel unfolds in concentric rings of interlocking fables that range from antebellum New York to the late twentieth-century Timber Wars of the Pacific Northwest and beyond. There is a world alongside ours—vast, slow, interconnected, resourceful, magnificently inventive, and almost invisible to us. This is the story of a handful of people who learn how to see that world and who are drawn up into its unfolding catastrophe.

About the Author
Richard Powers (born 18 June, 1957 in Evanston, Illinois) has received numerous honors including a MacArthur Fellowship, a Lannan Literary Award, and the James Fenimore Cooper Prize for Historical Fiction. He teaches in the Creative Writing M.F.A. program at the University of Illinois at Urbana-Champaign, teaching a graduate seminar in multimedia authoring and an undergraduate course in the mechanics of narrative.

He grew up in the northern suburbs of Chicago, the fourth of five children. Early in the 1960s his father, a high school principal moved the family to the north Chicago suburb of Lincolnwood; then, when he was 11 (1968) his father accepted a job at the International School of Bangkok, and the family spent the next five years in Thailand, where he became both an accomplished music student (cello, guitar, clarinet and saxophone) and a voracious reader - his earliest literary passion being for nonfiction - particularly biographies and science. He recalls feeling that he was "destined to be a scientist", thus as a teenager he explored careers in paleontology, oceanography, archaeology and physics.

He enrolled at the University of Illinois as a physics major but was inspired to change fields after taking an honors literature seminar (taught by Robert Schneider, a charismatic teacher and an accomplished Freudian critic who convinced Powers that literature was the "perfect place for someone who wanted the aerial view") - which led to him earning an M.A. in English. After graduating, he worked in Boston as a technical writer and computer programmer while continuing to read voraciously; he spent many weekends at the Museum of Fine Arts where, one day, he came across a photograph titled "Young Westerwald Farmers on Their Way to a Dance", in an interview sometime later he told an interviewer, "I knew instantly not only that they were on their way to a different dance than they thought they were, but that I was on the way to a dance that I hadn't anticipated until then. All of my previous year's random reading just consolidated and converged on this one moment, this image, which seemed to me to be the birth photograph of the twentieth century."

The identity of the three men in the picture preoccupied him so much that he decided to put his speculations in a novel. Within two days he had given up his job to focus on writing and three years later, in 1985, he published Three Farmers on Their Way to a Dance. It was praised by critics, but what most excited Powers was that at the age of 32 his indecision was over, "It was the discovery that I didn't have to give up anything that electrified me about writing, Here was a place where being a dilettante was actually an asset. You could, for two years, live vicariously as a German farmer or a molecular geneticist, that thing that you gave up at 18 and figured you'd never visit again."

His books share what Powers refers to as "a restlessness in theme", covering a multitude of areas but usually, if not always, exploring the effects of modern science and technology that, in Powers's words give an "an aerial view" - portraying humanity as just one small element in a complex universe.