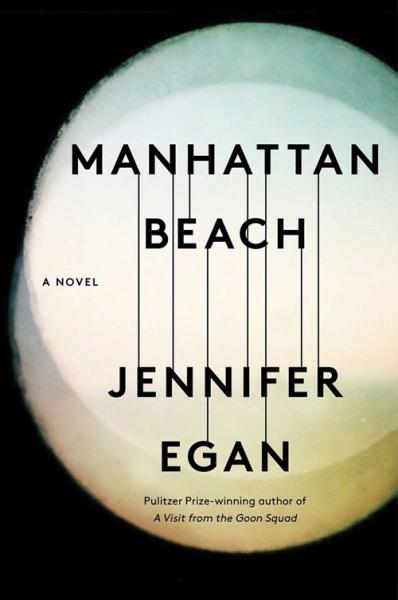 This month we will discuss Manhattan Beach by Jennifer Egan.

About the Book
Anna Kerrigan, nearly twelve years old, accompanies her father to visit Dexter Styles, a man who, she gleans, is crucial to the survival of her father and her family. She is mesmerized by the sea beyond the house and by some charged mystery between the two men.

‎Years later, her father has disappeared and the country is at war. Anna works at the Brooklyn Naval Yard, where women are allowed to hold jobs that once belonged to men, now soldiers abroad. She becomes the first female diver, the most dangerous and exclusive of occupations, repairing the ships that will help America win the war. One evening at a nightclub, she meets Dexter Styles again, and begins to understand the complexity of her father’s life, the reasons he might have vanished.

With the atmosphere of a noir thriller, Egan’s first historical novel follows Anna and Styles into a world populated by gangsters, sailors, divers, bankers, and union men. Manhattan Beach is a deft, dazzling, propulsive exploration of a transformative moment in the lives and identities of women and men, of America and the world. It is a magnificent novel by the author of A Visit from the Goon Squad, one of the great writers of our time.

About the Author
Jennifer Egan’s 2017 novel, Manhattan Beach, has been awarded the 2018 Andrew Carnegie Medal for Excellence in Fiction. Egan was born in Chicago and raised in San Francisco. She is also the author of The Invisible Circus, a novel which became a feature film starring Cameron Diaz in 2001, Look at Me, a finalist for the National Book Award in fiction in 2001, Emerald City and Other Stories, The Keep, and A Visit From the Goon Squad, which won the 2011 Pulitzer Prize, the National Book Critics Circle Award for Fiction, and the LA Times Book Prize. Her short stories have appeared in The New Yorker, Harpers, Granta, McSweeney’s and other magazines. She is a recipient of a Guggenheim Fellowship, a National Endowment for the Arts Fellowship in Fiction, and a Dorothy and Lewis B. Cullman Fellowship at the New York Public Library. Also a journalist, she has written frequently in the New York Times Magazine. Her 2002 cover story on homeless children received the Carroll Kowal Journalism Award, and “The Bipolar Kid” received a 2009 NAMI Outstanding Media Award for Science and Health Reporting from the National Alliance on Mental Illness. She lives in Brooklyn with her husband and two sons.