Join Laraine Herring, author of the forthcoming A Constellation of Ghosts: A Speculative Memoir with Ravens, in conversation with Gayle Brandeis about her latest book, 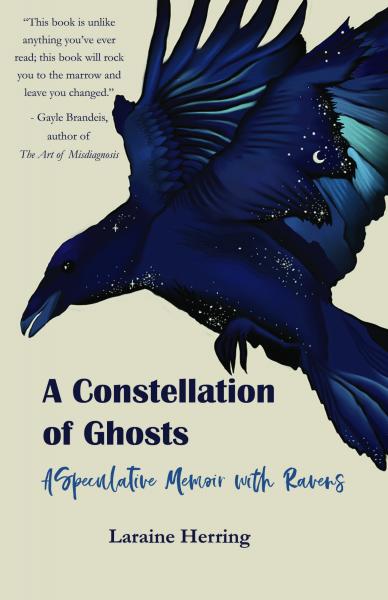 a novel-in-poems, called Many Restless Concerns: The Victims of Countess Bathory Speak in Chorus. We'll discuss inspiration, communing with the dead, the craft of writing, and experimental forms. Register now: https://us02web.zoom.us/meeting/register/tZ0vf-ypqjMoHdUw9WD5NNSxSOvGmLlq6yka

Gayle Brandeis is the author, most recently, of the novel in poems, Many Restless Concerns (Black Lawrence Press), longlisted for the Bram Stoker Award, and the memoir The Art of Misdiagnosis (Beacon Press). Earlier books include the poetry collection The Selfless Bliss of the Body (Finishing Line Press), the craft book Fruitflesh: Seeds of Inspiration for Women Who Write (HarperOne) and the novels The Book of Dead Birds (HarperCollins), which won the Bellwether Prize for Fiction of Social Engagement judged by Barbara Kingsolver, Toni Morrison, and Maxine Hong Kingston, Self Storage (Ballantine), Delta Girls (Ballantine), and My Life with the Lincolns (Henry Holt BYR), which was chosen as a state-wide read in Wisconsin. Her poetry, essays, and short fiction have been widely published in places such as The Guardian, The New York Times, The Washington Post, O (The Oprah Magazine), The Rumpus, Salon, Longreads, and more, and have received numerous honors, including the Columbia Journal Nonfiction Award, a Barbara Mandigo Kelly Peace Poetry Award, Notable Essays in Best American Essays 2016, 2019, and 2020, the QPB/Story Magazine Short Story Award and the 2018 Multi Genre Maverick Writer Award. She was named A Writer Who Makes a Difference by The Writer Magazine, and served as Inlandia Literary Laureate from 2012-2014, focusing on bringing writing workshops to underserved communities. She teaches at Antioch University and Sierra Nevada University. Find out more at gaylebrandeis.com.

Laraine Herring, founder of Fierce Monkey Book Coaching, is a writer, professor, and grief therapist. Her books include Writing Begins with the Breath: Embodying Your Authentic Voice (Shambhala); The Writing Warrior: Discovering the Courage to Free Your True Voice (Shambhala); On Being Stuck: Tapping into the Creative Power of Writer's Block (Shambhala); Lost Fathers: How Women Can Heal From Adolescent Father Loss (Hazelden); the novels Ghost Swamp Blues (White River Press); Into the Garden of Gethsemane, Georgia (Concentrium); and Gathering Lights: A Novel of San Francisco (Concentrium). She is the author and illustrator of The Grief Forest: a book we don't talk about (White River Press), and her memoir, A Constellation of Ghosts: A Speculative Memoir with Ravens will be released in October 2021 from Regal House. Her work has also appeared in The New York Times, The Manifest-Station, K'in, Tiferet, The Arizona Republic, and has been widely anthologized. She won the Barbara Deming Award for Women for her fiction, and her nonfiction has been nominated for a Pushcart Prize. She has been on the Arizona Artist's Roster, and she has taught nationally at the Kripalu Center for Yoga and Health, the Omega Institute, the Antioch Writer's Workshop, ASU's Desert Nights Rising Stars, and the Tucson Book Festival. She is the founder and editor-in-chief for Hags on Fire, an online zine dedicated to women's writing on perimenopause, menopause, and aging. She is a tenured professor of psychology and creative writing at Yavapai College in Prescott, AZ, and is also a private book coach. Find out more at laraineherring.com.

A Constellation of Ghosts: A Speculative Memoir with Ravens (Paperback)

Many Restless Concerns: The Victims of Countess Bathory Speak in Chorus (Paperback)