Join us at the Peregrine on September 24th at 2pm for a very special event with the NY Times Best Selling and Award-Winning Author, 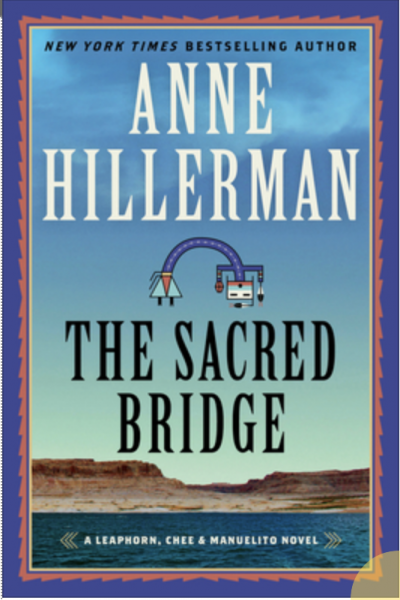 Anne Hillerman! An ancient mystery resurfaces with ramifications for the present day in this gripping chapter in the Leaphorn, Chee & Manuelito series from New York Times bestselling author Anne Hillerman. Also be sure to catch the AMC screening of Dark Winds, produced by Anne and Robert Redford.

“A fine legacy series . . .  in the spirit of her late father, Tony.”—Booklist

An ancient mystery resurfaces with ramifications for the present day in this gripping chapter in the Leaphorn, Chee & Manuelito series from New York Times bestselling author Anne Hillerman.

Sergeant Jim Chee’s vacation to beautiful Antelope Canyon and Lake Powell has a deeper purpose. He’s on a quest to unravel a sacred mystery his mentor, the Legendary Lieutenant Joe Leaphorn, stumbled across decades earlier.

Chee’s journey takes a deadly turn when, after a prayerful visit to the sacred Rainbow Bridge, he spots a body floating in the lake. The dead man, a Navajo with a passion for the canyon’s ancient rock art, lived a life filled with many secrets. Discovering why he died and who was responsible involves Chee in an investigation that puts his own life at risk.

Back in Shiprock, Officer Bernadette Manuelito is driving home when she witnesses an expensive sedan purposely kill a hitchhiker. The search to find the killer leads her to uncover a dangerous chain of interconnected revelations involving a Navajo Nation cannabis enterprise.

But the evil that is unleashed jeopardizes her mother and sister Darleen, and puts Bernie in the deadliest situation of her law enforcement career.

ANNE HILLERMAN is the bestselling author of the Leaphorn, Chee & Manuelito series. The Sacred Bridge is her seventh novel in the series, which was created by her father, Tony Hillerman. She lives in Santa Fe, New Mexico, where she is at work on her next novel.

"Captivating . . . Series fans will be well satisfied." — Publishers Weekly on The Sacred Bridge

"The Sacred Bridge is further proof that Anne Hillerman continues to produce top-notch mysteries that entertain, amuse, and move us." — New York Journal of Books