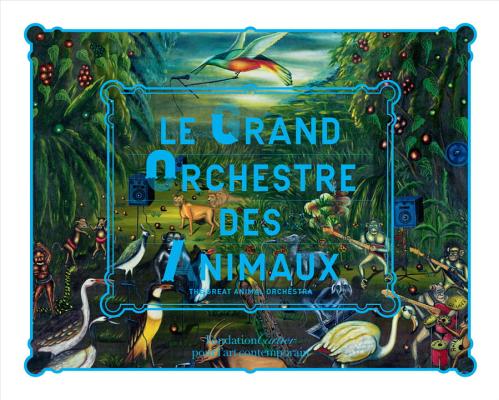 By Bernie Krause
Out of Print

A unique, auditory perspective into the world of animals, supported with illustrations from leading artists

From July to December 2016, the Fondation Cartier pour l’art contemporain will present the exhibition The Great Animal Orchestra, based on the work of Bernie Krause. An American bioacoustician, scientist and musician, Bernie Krause has collected more than 5,000 hours of recording of natural habitats, including more than 15,000 wild species from all around the world, for nearly fifty years. This unparalleled research offers a rare insight into the unseen world of animals. It reveals the beauty and the intricacy of animal vocalizations, which are now in danger of being silenced by human activity. Through his recordings, Bernie Krause implores us to start listening before quiet descends upon the great animal orchestra. The Great Animal Orchestra exhibition invites the audience to engage in an emotional and sensory experience through the appreciation of beautiful recordings from Africa, America, and various oceans. Works by contemporary artists along with Bernie Krause’s great orchestra, present a visual reflection on our relationship to the animal world and the place of animals in our society. An auditory and visual exploration of the natural world, The Great Animal Orchestra exhibition will immerse the audience in the beauty of the natural world while considering the environmental issues of the twenty-first century and what has led us to enter the “Sixth Extinction” era.

The catalogue published in conjunction with the exhibition is an aesthetic, scientific, and philosophical exploration of the animal world. Readers have the opportunity to discover Bernie Krause’s work and to ponder issues related to the preservation of biodiversity through many essays by specialists. Including photographs, maps, diagrams, sonograms, as well as works of the art presented in the exhibition, this catalogue is a true manifesto for the conservation of the planet’s imperiled ecosystems.

Includes an exclusive CD of the exhibition soundtrack.

Bernie Krause is a bioacoustician, scientist, and musician. He was a musician and sound engineer during the 1960s and 1970s, and also contributed to soundtracks for films such as Rosemary’s Baby and Apocalypse Now. He is the author of several books.