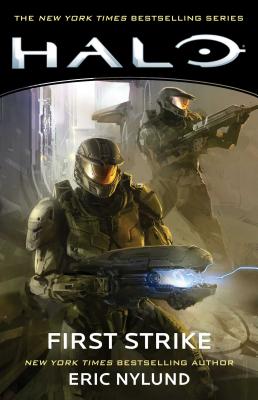 This is book number 3 in the Halo series.

The New York Times bestselling aftermath of Halo: Combat Evolved featuring the Master Chief—part of the expanded universe based on the award-winning video game series!

2552. The theocratic military alliance known as the Covenant is showing no mercy as it continues to assault every human world it encounters, but in the way lies humanity’s greatest champion, the super-soldier Spartan John-117—the Master Chief. Together with his AI companion Cortana and the last remaining Spartans, the galaxy-spanning fight rages on two fronts following the destruction of the human military stronghold Reach by Covenant forces and the mysterious artificial ringworld known as “Halo” at the hands of the Master Chief.

One faction—a squad of Spartans lead by Blue Team’s Fred-104 and Kelly-087—is trapped on the glassed surface of Reach, the only planet they’ve ever known as home. And beneath this ruined world, Dr. Catherine Halsey has discovered an ancient secret...one that could alter the course of the war. Meanwhile, the Master Chief and Cortana lead a second group toward a gathering of Covenant warships, as the United Nations Space Command’s worst nightmare has finally come true: the Covenant has discovered the location of Earth and is forming a massive fleet to utterly destroy it, as well as all who oppose the indomitable will of the Prophets…

Eric Nylund is the author of many novels, including the New York Times bestselling works Halo: The Fall of Reach, Halo: First Strike, and Halo: Ghosts of Onyx, and the World Fantasy nominated Dry Water. As a writer for Microsoft Game Studios, Nylund helped develop such game franchises as Halo and Gears of War. He has also helped shape the intellectual property for some of the world’s best videogame developers, including Bioware and Epic Games, and also worked with Amazon’s game studios. Nylund lives in the Pacific Northwest with his wife, award-winning science fiction/fantasy writer Syne Mitchell, and their son.