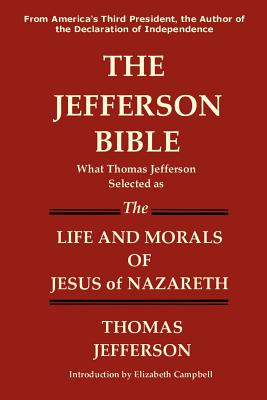 By Thomas Jefferson, Elizabeth Campbell (Introduction by)
$17.48
Available from our Warehouse (Not in store currently)
(This book cannot be returned)

In 1820, Thomas Jefferson worked for months, often by candlelight, carefully cutting the pages of several Bibles to remove the teachings of Jesus. He then reorganized those verses and pasted them into a new book that he called simply, The Life and Morals of Jesus of Nazareth". Jefferson believed that the words of Jesus were "the most benevolent code of morals which has ever been offered to man", and he wanted to study his teachings apart from the rest of the Gospels. With a boldness that would have shocked many of his contemporaries, Jefferson eliminated anything that he felt was unsupported by history or science, including the virgin birth, Jesus' miracles and the resurrection. He then rearranged the remaining passages chronologically and in parallel translations in English, French, Greek and Latin, combining parts of all four gospels into a narrative that begins in Bethlehem with Jesus' birth and ends with his burial. Too controversial to be published during Jefferson's lifetime, The Life and Morals of Jesus of Nazareth--now usually called The Jefferson Bible--was reprinted by an act of Congress in 1904, and for fifty years all freshman congressmen were given a copy when they took their oath of office. The Jefferson Bible: What Thomas Jefferson Selected as the Life and Morals of Jesus of Nazareth includes Jefferson's original English text, as well as a new introduction that examines Jefferson's life and complicated religious beliefs. There is also an index listing Jefferson's selections from each gospel and how he organized them. Jefferson's clear narrative, nicely formatted in this edition, makes this book a good introduction to Jesus' life and teachings for both adults and younger readers. It will also be of special note for anyone interested in ethics, Christianity, American history, or the religious ideas of one of America's most influential Founding Fathers. Highly recommended.