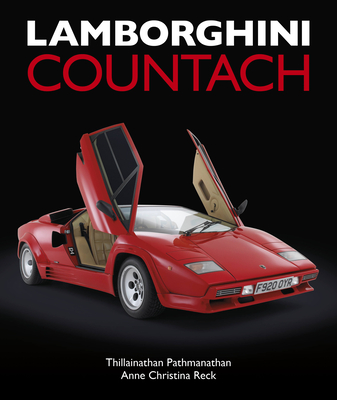 When launched at the Geneva motor show in 1971, the Lamborghini Countach was like a vision of the future, with its incredibly radical styling by Bertone’s Marcello Gandini. Through various evolutionary stages, the Countach remained in production from 1973 to 1990 and during that time 1,997 examples were manufactured, making it exceedingly rare as well as highly desirable. Subsequently the magnificent Countach has risen to almost mythical status among collectors and enthusiasts. Now, as the model approaches its 50th anniversary, two passionate and deeply knowledgeable Countach co-owners have written an authoritative new book — the first English-language study of the car for 30 years — to celebrate this fabled Italian supercar in all its glory.
Beautifully designed and illustrated, this book will be treasured not only by Lamborghini fans but anyone who adores sports cars, especially of the exotic Italian variety.

Dr Thillainathan "Path" Pathmanathan was born in Malaysia, where his interest in cars was kindled at the age of eight, by the sight of the Lamborghini Marzal concept car at a Motor Show. He boarded at Cheltenham College, obtained a degree in Physiology from the University of London, and then his medical degree from Pembroke College, University of Cambridge. He trained as an eye surgeon in London, Southampton, and Liverpool, before doing a sub-specialty fellowship in glaucoma at the University of Toronto. He has been a Consultant Eye Surgeon since 1999. His interest in Lamborghini cars has never waned, and his primary interest is in the mid-engined, wedge-shaped, spaceframe-chassised, Lamborghini supercar, with their South-North orientated Bizzarrini engines and their genuinely vertical-opening guillotine doors. He feels immensely privileged to have joint temporary custodianship of KTM X-BOW R Chassis 0642, which only presented itself after a wait of ten years. His long-standing fascination with the X-BOW lies in the similarities and close associations that this radical Road-Racer shares with its current Lamborghini stablemates: Countach Chassis 12399, a Rosso Siviglia 88 1/2 5000 QV, and Murcielago Chassis 1564, an Arancio Atlas 2005 Roadster.

Dr Anne Christina Reck obtained her medical degree from the University of Copenhagen, and then trained as an eye surgeon in London and Southampton. She did a sub-specialty fellowship in the retina at Moorfields Eye Hospital, and has been a Consultant Eye Surgeon since 1999. Dr Reck's deep interest in the KTM X-BOW started on a road trip between the United Kingdom and the Pannonia-Ring Race Circuit in Hungary, during which time she helped draw out the skeleton draft of a book dedicated to the car. Her dedication to the X-BOW was best exemplified by her precise and accurate note-taking about the X-BOW, during a 5.20 AM high-speed drive on the Grossglockner High Alpine Road, on the day before a visit to Kiska Design Center.