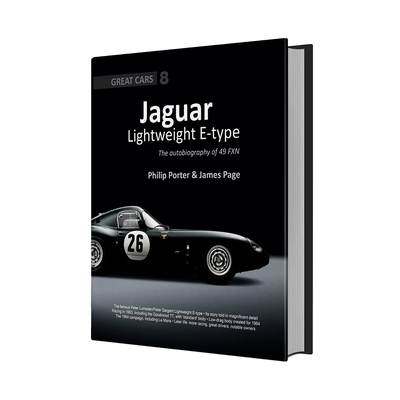 The Great Cars series returns with an in-depth look at the 1963 Lightweight Jaguar E-type, chassis number 49 FXN. This Porter Press series selects individual vehicles that standout in the racing world, and commits to a full biography of them.
​
This luminary among Jaguar Lightweight E-types made its race debut at the Nurburgring, freshly modified for aerodynamics and with an incredible engine developed by masterminds Dr. Samir Klat and Prof. Harry Watson.

Peter Lumsden and Peter Sargent proved its high-speed potential by running third in the GT class at Le Mans the next year, and three months later, it was the best-placed E-type at the Tourist Trophy at Goodwood, as well as fifth in the GT class.

49 FXN’s successes go on, and you’ll see them all in full across nearly 300 period images, many previously unpublished, and plenty of full color studio photography.

Philip Porter has written about 30 motoring books, twice winning the Montagu Trophy for best motoring book of the year. A lifelong motor racing enthusiast, that enthusiasm was largely fired by Stirling Moss. Like so many young boys in the fifties, he was Philip’s absolute hero. As a consequence, Philip began successfully competing in motor sport while still at school. He began acquiring classic sports cars long before it became a boom and owns 9600 HP, the oldest E-type in existence. This led to some motoring journalism among his busy business career. He later satisfied his competitive spirit with flying hot air balloons and airships, winning the silver medal at the 1991 European Airship Championships. In 1992 he became the first person ever to fly an airship in Africa. He is Chairman of the Sherlock Holmes Society and an active member of the Jerome K. Jerome Society. In 1997 he and his wife Julie founded the International Jaguar XK Club and in 2004 they started the Jaguar E-type Club. Philip edits both monthly magazines and Sir Stirling is Patron of the XK Club. Philip and Julie live in a Tudor farmhouse in Worcestershire and have their offices in an adjoining thatched barn.

James Page grew up around motorsport, thanks to his father’s involvement in sprints and hill climbs, and spent his childhood devouring the many car-related books and magazines that could be found around the house. After studying journalism at Falmouth University, during which he contributed race reports to Motoring News and Autosport, he had a brief diversion into the world of professional golf before joining Future Publishing in 2005 as a production assistant. James then served as deputy editor of Classics Monthly between 2007 and 2011, when he moved to Classic & Sports Car. After spending three years as deputy editor, he became the magazine’s editor in 2014. He currently lives in South Gloucestershire with his wife, two children and a temperamental MG 1300.