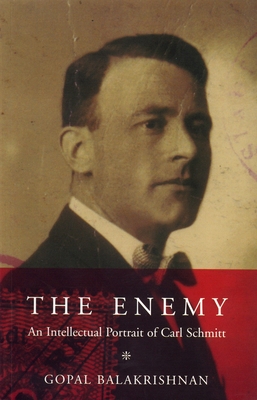 The writings of Carl Schmitt form what is arguably the most disconcerting, original, and yet still unfamiliar body of twentieth-century political thought. In the English-speaking world, he is terra incognita, a name associated with Nazism, the author of a largely untranslated oeuvre forming no recognizable system, coming to us from a disturbing place and time in the form of fragments.

The Enemy is a comprehensive reconstruction and analysis of all of Schmitt’s major works—his books, articles and pamphlets from 1919 to 1950—presented in an arresting narrative form. The revelation of his work is that, unlike mainstream Nazi ideology, Schmitt makes a strong philosophical claim for the necessity of confrontational politics within a democratic system; a claim that has resonance in today’s hegemony of consensual politics.

Gopal Balakrishnan is the author of The Enemy: An Intellectual Portrait of Carl Schmitt, and editor of Debating “Empire” and (with Benedict Anderson) Mapping the Nation. A member of the New Left Review editorial board, he teaches Contemporary Theory at the University of California, Santa Cruz.

“Carl Schmitt is probably the major twentieth-century political theorist whose work remains internationally unknown. Balakrishnan’s comprehensive and sophisticated intellectual biography should rectify this. Here is a book which everyone interested in modern political theory should read.”—Michael Mann

“The Enemy is one of the most brilliant and systematic studies of Schmitt’s extremely difficult intellectual contribution. Gopal Balakrishnan never forgets Schmitt’s hateful political choices. Yet one cannot deny that people of diametrically opposite political allegiances have been influenced by Schmitt’s thought. I think that The Enemy will be acclaimed not only by ‘Schmittians’, right and left, but also by decided critics of the German thinker as the most important recent contribution to the understanding of his work.”—Saul Friedlander, Professor of History, UCLA

“To many, not only on the right, Schmitt’s astringency, depth and realism will seem preferable to the conventional and nauseating politics of the Cooks and the Blairs. But to those influenced even a slightest degree by Schmitt, a worrying question must remain ... in the international realm, whether it is conceived as a global order or as an arena for competition between independent nations, is there ultimately no rule but that imposed by the strongest enemy? ... If Carl Schmitt together with Gopal Balakrishnan help us to edge our way towards thinking about this troubling position, then Balakrishnan’s effort will not have been in vain.”—Times Literary Supplement