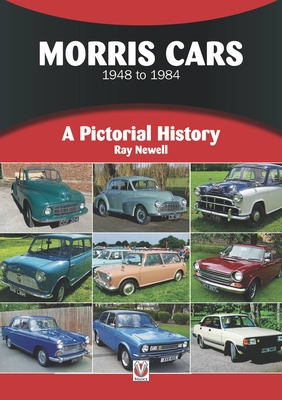 Morris was a prominent marque in Britain and around the world from the outset of production in 1913. In the postwar era Morris cars were exported throughout the world and many were assembled in overseas plants. Many Morris models retain an enthusiastic following today, even though the last car was produced in 1984.

Illustrated in full colour, and with detailed information including colour schemes, optional equipment and technical specifications, this is a complete catalogue of the cars of that era, and will be an invaluable identification guide for anyone interested in these classic British cars. It was written by marque expert, Ray Newell, who has had a long association with Morris Cars, been Secretary of the Morris Minor Owners Club since 1983, and a founder member of the Morris Vehicles Association in 2013.

Ray Newell is a well known and respected figure within Morris Minor circles. He has been Secretary of the UK based Morris Minor Owners Club since 1983 and has contributed significantly to the Club’s growth and development in that time. He has written extensively about the Morris Minor, but of the eight books he has written, this is the most detailed and comprehensive. Ray has owned a variety of Morris Minors over the years but currently his pride and joy is a rare 1949 Series MM Tourer. He has recently acquired an equally rare 1954 Series II van from New Zealand, which is currently undergoing a full restoration. Ray lives in Derbyshire, England.