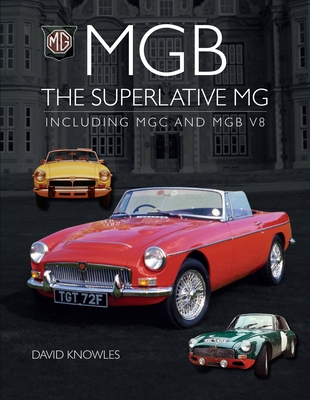 Launching in 1962 and in production for eighteen years, the MGB became one of the most successful sports cars the world has ever known. MGB - The Superlative MG describes how the MGB arose principally from the ideas of one man, MG’s Chief Engineer, Syd Enever, how it was designed and developed, how it survived and thrived, and how it became the classic car still so highly regarded today.

With over 620 archive and specially commissioned photographs, including previously unseen models, sketches and prototypes, and packed with tables and data, it includes how the drive to replace the revolutionary MGA led to the development of the MGB, with the key personnel involved at each stage. It goes on to describe the genesis of the Pininfarina-refined MGB GT, and the Ferranti MGB hardtop as well as the MGC and incredible lightweight MGC GTS – including, for the first time, what became of the factory cars when first sold.

The story of Ken Costello and his MGB V8, and the factory MGB GT V8 is covered along with the evolution of the MGB through the difficult period of British Leyland to the tragic end of the Abingdon factory. The full story of the lost cause of the Aston Martin Lagonda bid to rescue Abingdon and the MGB – including political and commercial insight is given along with detailed insight from many people who were closely involved in the creation, development and ultimate demise of the MGB.

The motorsports story of the MGB family, including race details, insiders’ stories and key racer biographies is covered. Finally, the sales and marketing of the MGB in its two principal sales markets, including the clever advertising campaigns and commercials is covered and details of the overseas assembly of the MGB, in particular Ireland and Australia.

David Knowles has become synonymous with MG history, especially the post-war story. Although by profession he is a Chartered Civil Engineer, he has been writing, principally about MG and Triumph sports cars, for over thirty years, and is always looking for fresh nuggets to share with fellow enthusiasts.