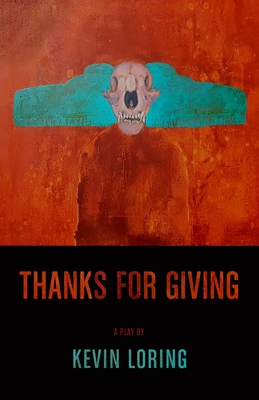 Nan's family is home for Thanksgiving, but some unsolicited truths are about to be dropped at the dinner table. Old wounds and new realities collide, and sibling rivalry is stoked, but the enduring spirit that guides this family charges on, ever fierce. Thanks for Giving offers plenty to chew on. This intimate and restorative new play from Governor General's Literary Award winner Kevin Loring, the first ever Artistic Director of Indigenous Theatre at the National Arts Centre of Canada, is about legacy - the legacy of our personal and collective histories, and a family's legacy as it moves into an age where the assumptions of the old ways surrender to new possibilities. But if the play's main course is legacy, the dessert is pumpkin pie. Tuck in.

Kevin Loring is a member of the Nlaka'pamux (Thompson) First Nation in Lytton, B.C. As an actor he has performed in numerous plays across Canada including Marie Clements's Burning Vision and Copper Thunderbird, and in the NAC's 40th anniversary production of George Ryga's The Ecstasy of Rita Joe. He also starred in the 2007 feature film Pathfinder, and co-produced and co-hosted the documentary Canyon War: The Untold Story about the 1858 Fraser Canyon War. He was the recipient of the 2005 City of Vancouver Mayor's Arts Award for Emerging Theatre Artist, Artist-in-Residence at The Playhouse Theatre Company in 2006, and iPlaywright in Residence at the National Arts Centre, Ottawa, in 2010. His first play Where the Blood Mixes, won the Jessie Richardson Award for Outstanding Original Script; the Sydney J. Risk Prize for Outstanding Original Script by an Emerging Playwright; and the 2009 Governor General's Literary Award for Drama. Where the Blood Mixes premiered at the 2008 Luminato Festival in Toronto. Presented at the 2008 Magnetic North Festival in Vancouver, it opened on the day of the House of Commons' apology for the legacy of suffering that generations of Indigenous people continue to endure as a result of their experiences in Canada's residential school system. A remount of this production, in association with the playwright's own company, The Savage Society, is scheduled for a national tour as part of the 2010 Cultural Olympiad. Kevin Loring participated in the closing ceremonies of the Aboriginal Pavilion at the 2010 Winter Olympics.