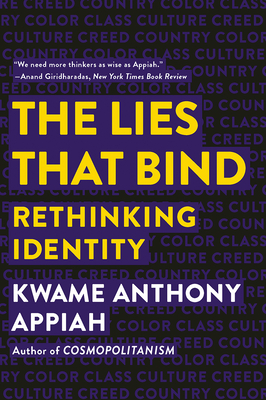 As seen on the Netflix series Explained

From the best-selling author of Cosmopolitanism comes this revealing exploration of how the collective identities that shape our polarized world are riddled with contradiction.

Who do you think you are? That’s a question bound up in another: What do you think you are? Gender. Religion. Race. Nationality. Class. Culture. Such affiliations give contours to our sense of self, and shape our polarized world. Yet the collective identities they spawn are riddled with contradictions, and cratered with falsehoods.

Kwame Anthony Appiah’s The Lies That Bind is an incandescent exploration of the nature and history of the identities that define us. It challenges our assumptions about how identities work. We all know there are conflicts between identities, but Appiah shows how identities are created by conflict. Religion, he demonstrates, gains power because it isn’t primarily about belief. Our everyday notions of race are the detritus of discarded nineteenth-century science. Our cherished concept of the sovereign nation—of self-rule—is incoherent and unstable. Class systems can become entrenched by efforts to reform them. Even the very idea of Western culture is a shimmering mirage.

From Anton Wilhelm Amo, the eighteenth-century African child who miraculously became an eminent European philosopher before retiring back to Africa, to Italo Svevo, the literary marvel who changed citizenship without leaving home, to Appiah’s own father, Joseph, an anticolonial firebrand who was ready to give his life for a nation that did not yet exist, Appiah interweaves keen-edged argument with vibrant narratives to expose the myths behind our collective identities.

These “mistaken identities,” Appiah explains, can fuel some of our worst atrocities—from chattel slavery to genocide. And yet, he argues that social identities aren’t something we can simply do away with. They can usher in moral progress and bring significance to our lives by connecting the small scale of our daily existence with larger movements, causes, and concerns.

Elaborating a bold and clarifying new theory of identity, The Lies That Bind is a ringing philosophical statement for the anxious, conflict-ridden twenty-first century. This book will transform the way we think about who—and what—“we” are.

Kwame Anthony Appiah pens the Ethicist column for the New York Times, and is the author of the prize-winning Cosmopolitanism, among many other works. A professor of philosophy and law at New York University, Appiah lives in New York.

Appiah believes we’re in wars of identity because we keep making the same mistake: exaggerating our differences with others and our similarities with our own kind… [his] writing is often fresh, even beautiful… We need more thinkers as wise as Appiah.
— Anand Giridharadas, New York Times Book Review (Cover Review)

Excellent… Appiah hopes to inspire a rethinking of our restrictive and therefore divisive notions of who we are. But if that seems an impossible task, should the massive obstacles stop us from trying? [Appiah] brings to the task a number of insights and the mind of a realist… if the solution to the fracturing of our world remains elusive, this book at least helps us think clearly about the problem.
— Clifford Thompson, The Washington Post

Appiah makes the controversial and difficult subject of identity lucid, edifying, and even fun. When it comes to the humane values that allow us to live with one another, he may be our most penetrating—and entertaining—major philosopher.
— Atul Gawande, author of Being Mortal

The Lies that Bind is a small volume of mighty power. In his lucid prose, Appiah elegantly dismantles the humbug, dogma, pseudo-science and propaganda that have long dogged our attempts to discuss 'identity,' and offers in their place a practical and philosophical tool-kit, as subtly radical in its aims as it is humane in application. From the illusions of 19th century ideas of biological destiny, to the late-capitalist logic of our contemporary 'cultural appropriation' debates, this book will help a lot of people think with far more clarity about some of the thorniest issues of our times. An inspiring and essential read.

— Zadie Smith, author of Swing Time and Changing My Mind

The Lies That Bind ranges even more widely in time and space than [Francis Fukuyama's] Identity… The point of this entertaining, meandering journey is that identities are less solid than is frequently thought.

Through this meditative journey, Appiah calls on us to buckle down to the difficult task of living with complexity—that is, the task of being modern. Erudite, personal, timely and deeply humane, this is a book for our time.
— Arlie Russell Hochschild, author of Strangers in Their Own Land, a National Book Award finalist

Not only does that elegant writer and transcendent thinker, Anthony Appiah, clarify the historical gaslighting around color and racial stereotype, he also forges radical new theories of identity as they apply to almost every conceivable aspect of self. The Lies That Bind forces you to rethink what tribe you actually belong to with regard to race and religion, geography and gender, class and sexuality. Sheer genius and a joy to read.

— Mary Karr, author of The Art of Memoir

Kwame
Anthony Appiah again demonstrates that he is one of our foremost writers on
identity, culture, and difference. With his trademark clarity, elegance, and
rigor, he is a most useful guide to thinking through some of the complicated
problems of who we are and what we can be.
— Viet Thanh Nguyen, Pulitzer Prize–winning author of The Sympathizer

A provocative and brilliant intervention into
the current discussion of the role identity plays in our society. We’re doing
it all wrong, as Appiah demonstrates with characteristic erudition, clear
thinking, and elegant prose.
— Annette Gordon-Reed, co-author of the bestselling “Most Blessed of the Patriarchs”

This wonderful book unravels a tapestry of suppositions about identity. Understanding what draws us together and what tears us apart lies at the core of democracy. This is a vital book, an antidote to violent nativism, and a key to success in the human experiment.
— Louise Erdrich, author of LaRose

The terrible power of bad ideas is best resisted, as The Lies That Bind shows, by subjecting them to serious critical scrutiny. Identities central to contemporary cultures can be both historically grounded and utterly misconceived. There is so much to learn from Anthony Appiah's splendid book.

— Amartya Sen, winner of the Nobel Prize in Economics

Appiah—who could variously be described as biracial, Ghanaian British, an Asante, a Londoner, and a gay cis man—is perfectly positioned to explore the various meanings and missteps involved in charting human identity... His discussions of religion and nationality are particularly apt... Perhaps the most startling of Appiah’s claims is that cultural differences are a response to the need for a distinguishing identity. Herein lies the paradox of cultural identity: the human need to belong will always require an outsider group to reject.
— Booklist

[A] probing critique of identity politics... With deep learning and incisive reasoning, Appiah makes a forceful argument for building identity from individual aspirations rather than exclusionary dogmas.
— Publishers Weekly

A celebrated philosopher advocates for a theory of human identity that recognizes but transcends race, religion, nation, culture, and class… Appiah makes irrefutable points about the incoherence of narrowly defined identities and our collective delusions…The author has a penetrating grasp of the complexities of identity, and he wields history like a scalpel, extracting the cancerous myths, poisonous prejudices, and foolish antagonisms that divide us. A well-informed philosophical investigation into methods for breaking through 'walls that will not let in fresh and enlivening air.
— Kirkus Reviews