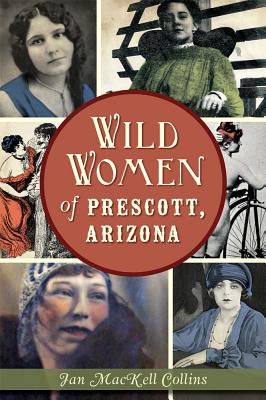 By Jan Mackell Collins
$19.99
On Our Shelves Now

I thoroughly enjoyed Jan MacKell Collins's book, "Wild Women of Prescott," which not only presents factual information, gleaned from extensive research, concerning the underbelly of Prescott's history, but also gives it to readers in the form of colorful and fascinating stories surrounding the events. Mackell Collins is not only a historical researcher, but a wonderful storyteller, piecing together from archives, interviews and records, the characters and plot lines behind the many historical dramas that took place in saloons, brothels, courtrooms of our area.

Arizona remained a raw, rather uncivilized territory before it became one of the last states to enter the Union. Few towns exemplify this more than Prescott. Untamed land lured those who saw an opportunity to prosper, including a number of shady ladies. A staple of any western town, these wanton women were independent, hearty individuals eager to unpack their petticoats and set up shop. Within six years of establishment, at least five prostitutes operated in Prescott. As their clientele grew, so did their influence. Mollie Sheppard, Lida Winchell, Gabriell Dollie and many more women were integral forces on the city that should not be forgotten. From Granite Street to Whiskey Row, Prescott's painted ladies established an ever-expanding red-light district halted only by Arizona's admission to the Union in 1912. Join author Jan MacKell Collins to discover the soiled doves of Prescott's red-light district.