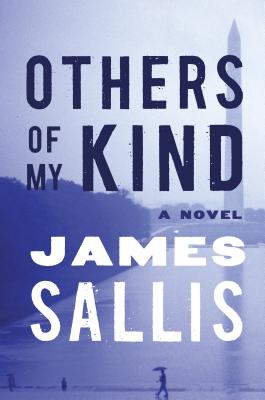 By James Sallis
Out of Print

James Sallis's new novel, Others of My Kind, is a compelling read, and hard to put down. Jenny Rowan, the novel's protagonist, had been abducted at age 8 and kept in a box under her captor's bed when he wasn't home. On a "second anniversary" trip to the mall, she escaped and managed to live in the mall for 18 months before being found out, which earned her the notoriety as the Mall Girl before she was put into the state child-care system.
Now Jenny works as a respected production editor for a local public TV station. The same resilience and strength of spirit that allowed her to escape and survive helped her to put her past in a hidden box, which she keeps secret from all but a few people in her life. Then one day she finds a detective at her door who wants her to help with another of her kind, a young woman who'd been abducted as a girl and held captive for years. Her gradual acceptance of this duty to another begins a journey into her own hidden memories that will change her life forever.

At age eight, Jenny Rowan was abducted and kept for two years in a box beneath her captor's bed. Eventually she escaped and, after living for eighteen months on cast-offs at the local mall, was put into the child-care system. Suing for emancipation, at age sixteen she became a legal adult. Nowadays she works as a production editor for the local public TV station, and is one of the world's good people.

One evening she returns home to find a detective waiting for her. Though her records are sealed, he somehow knows her story. He asks if she can help with a young woman who, like her many years before, has been abducted and traumatized.

Initially hesitant, Jenny decides to get involved, reviving buried memories and setting in motion an unexpected interchange with the president herself. As brilliantly spare and compact as are all of James Sallis's novels, Others of My Kind stands apart for its female protagonist. Set in a near future of political turmoil, it is a story of how we overcome, how we shape ourselves by what happens to us, and of how the human spirit, whatever horrors it undergoes, will not be put down.

James Sallis is the author of more than two dozen volumes of fiction, poetry, translation, essays, and criticism, including the Lew Griffin cycle and Drive. His biography of the great crime writer Chester Himes is an acknowledged classic. Sallis lives in Phoenix, Arizona, with his wife, Karyn, and an enormous white cat.

“Sallis has always been the master of doing more with less, as he demonstrates once again with this startling experimental novel…The theme of working with 'what you have left,' a constant in Sallis's world, permeates every sentence of this slim, insightful work.” —Publishers Weekly (starred review)

“Surprising power: Jenny is an irresistible character, and there are flashes here of insight and sweetness.” —Kirkus Reviews

“This will make you think about how—indeed, if—you interact with the world; how we construct our lives; how we heal from tragedy; how to carry on when nothing makes sense…this slim novel offers a wellspring for contemplation.” —Booklist