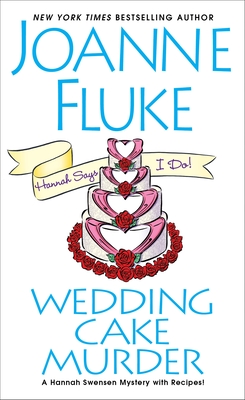 This is book number 19 in the A Hannah Swensen Mystery series.

Everyone in Lake Eden, Minnesota, may have had their doubts, but at long last, Hannah Swensen is getting married!

Hannah is thrilled to be marrying Ross Barton, her college crush. And her excitement only grows when she learns he’ll be able to join her on her trip to New York City for the Food Channel’s dessert chef contest. They get a taste of the Big Apple before Hannah wins the Hometown Challenge and the producers bring all the contestants to Lake Eden to tape the remainder of the show. It’s nerve-wracking enough being judged by Alain Duquesne, a celebrity chef with a nasty reputation. But it’s even more chilling to find him stabbed to death in the Lake Eden Inn’s walk-in cooler—before he’s even had a chance to taste Hannah’s Butterscotch Sugar Cookies! Now Hannah has not only lost her advantage, she’ll have to solve a mystery with more layers than a five-tiered wedding cake…

JOANNE FLUKE is the New York Times bestselling author of the Hannah Swensen mysteries, which include Double Fudge Brownie Murder, Blackberry Pie Murder, Cinnamon Roll Murder, and the book that started it all, Chocolate Chip Cookie Murder. That first installment in the series premiered as Murder, She Baked:  A Chocolate Chip Cookie Mystery on the Hallmark Movies & Mysteries Channel. Like Hannah Swensen, Joanne Fluke was born and raised in a small town in rural Minnesota, but now lives in Southern California. Please visit her online at www.JoanneFluke.com.