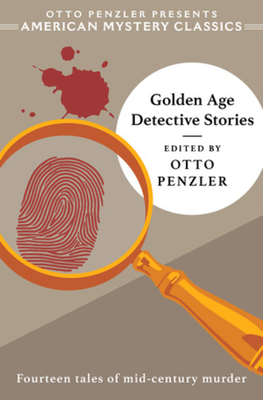 Sometimes, the police aren’t the best suited to solve a crime. Depending on the case, you may find that a retired magician, a schoolteacher, a Broadway producer, or a nun have the necessary skills to suss out a killer. Or, in other cases, a blind veteran, or a publisher, or a hard-drinking attorney, or a mostly-sober attorney… or, indeed, any sort of detective you could think of might be able to best the professionals when it comes to comprehending strange and puzzling murders.

At least, that’s what the authors from the Golden Age of American mystery fiction would have you think. For decades in the middle of the twentieth century, the country’s best-selling authors produced delightful tales in which all types of eccentrics used rarified knowledge to interpret confounding clues. And for even longer, in the decades that have followed, these characters have continued to entertain new audiences with every new generation that discovers them.

Edgar Award-winning anthologist Otto Penzler selects some of the greatest American short stories from era. With authors including Ellery Queen, Mary Roberts Rinehart, Cornell Woolrich, Erle Stanley Gardner, and Anthony Boucher, this collection is a treat for those who know and love this celebrated period in literary history, and a great introduction to its best writers for the uninitiated.

Includes discussion guide questions for use in book clubs.

Otto Penzler, the creator of American Mystery Classics, is also the founder of the Mysterious Press (1975); Mysterious Press.com (2011), an electronic-book publishing company; and New York City’s Mysterious Bookshop (1979). He has won a Raven, the Ellery Queen Award, two Edgars (for the Encyclopedia of Mystery and Detection, 1977, and The Lineup, 2010), and lifetime achievement awards from Noircon and The Strand Magazine. He has edited more than 70 anthologies and written extensively about mystery fiction.

In addition to well-known contributors, such as Ellery Queen and Erle Stanley Gardner, Penzler presents memorable tales from the lesser-known [...] This sampler is an easy gateway to other volumes in this high-quality series.
— Publishers Weekly STARRED REVIEW

For some readers, the book will be a walk down memory lane, or a way to reconnect with writers they haven’t visited in a while; for others, it’s a wonderful introduction to some new writers—people who not only excelled at mystery fiction, but who also helped create and define the genre. The book belongs on the shelf of any true mystery fan, and in the collection of every library’s mystery section.
— Booklist