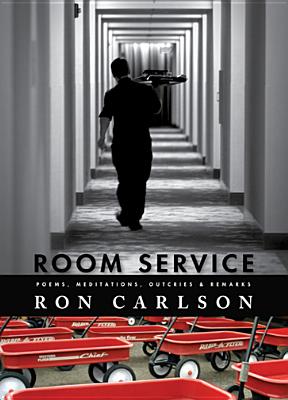 Carlson is funny, poignant and penetrating in these "poems, meditations, outcries and remarks" - often at the same time.

How did one of America’s most gifted fabulists come to write a collection of poetry? For thirty years, Ron Carlson has joked about writing one poem a year, and to look for his book of them in 2012. The joke came true: Room Service: Poems, Meditations, Outcries and Remarks is a genre-bending collection of traditional verse, prose poetry, microfiction, and—why not?—a play or two, dancing easily from the lyrical to the surreal to the comical, capturing the long sweep of life’s simple necessities and small triumphs. Brimming with Carlson’s signature good humor, these pieces were written over many years in many places, and are unified, as befits a first book of poetry, by hope. Room Service reminds us why poetry is necessary, and will leave you wondering what took him so long.

Ron Carlson is the author of eight books of fiction, most recently The Signal. His short stories have appeared in Esquire, Harper’s, The New Yorker, and other journals, as well as The Best American Short Stories, The O. Henry Prize Series, The Pushcart Prize Anthology, The Norton Anthology of Short Fiction, and other anthologies. He has received a National Endowment for the Arts Fellowship in Fiction and a National Society of Arts and Letters Literature Award. His book on writing, Ron Carlson Writes a Story, is taught widely. He is director of the Graduate Program in Fiction at the University of California, Irvine.

“Carlson writes about the natural world with convincing authority…with Ron Carlson, you really are in expert hands.” —The New York Times Book Review

“Carlson never drops an extra word or a false phrase.”
—The Washington Post

“Carlson’s a romantic—even when he’s writing about failings, folly and violence.”
—The Los Angeles Times

“Carlson’s focus is transporting, absorbing. It shakes you from stupor, strips you down. He understands that most of us live in a world of enervating crap, whether in the cliffs of Idaho or the canyons of the city.”
—Esquire

“Carlson captures the ordinary occurrences that define our lives.”—Publishers Weekly

“Carlson transforms the comic junkpile of America`s waning prosperity into a livable, if harsh, landscape.”
—The Chicago Tribune