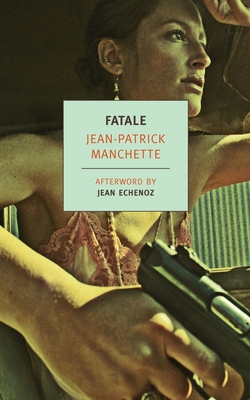 Whether you call her a coldhearted grifter or the soul of modern capitalism, there’s no question that Aimée is a killer and a more than professional one. Now she’s set her eyes on a backwater burg—where, while posing as an innocent (albeit drop-dead gorgeous) newcomer to town, she means to sniff out old grudges and engineer new opportunities, deftly playing different people and different interests against each other the better, as always, to make a killing. But then something snaps: the master manipulator falls prey to a pure and wayward passion.

Aimée has become the avenging angel of her own nihilism, exacting the destruction of a whole society of destroyers. An unholy original, Jean-Patrick Manchette transformed the modern detective novel into a weapon of gleeful satire and anarchic fun. In Fatale he mixes equal measures of farce, mayhem, and madness to prepare a rare literary cocktail that packs a devastating punch.

Jean-Patrick Manchette (1942–1995) was a genre-redefining French crime novelist, screenwriter, critic, and translator. Born in Marseille to a family of relatively modest means, Manchette grew up in a southwestern suburb of Paris, where he wrote from an early age. While a student of English literature at the Sorbonne, he contributed articles to the newspaper La Voix Communiste and became active in the national students’ union. In 1961 he married, and with his wife, Mélissa began translating American crime fiction—he would go on to translate the works of such writers as Donald Westlake, Ross Thomas, and Margaret Millar, often for Gallimard’s Série noire. Throughout the 1960s Manchette supported himself with various jobs writing television scripts, pornographic screenplays, young-adult books, and film novelizations. In 1971 he published his first novel, a collaboration with Jean-Pierre Bastid, and embarked on his literary career in earnest, producing ten subsequent works over the course of the next two decades and establishing a new genre of French novel, the néo-polar (distinguished from traditional detective novel, or polar, by its political engagement and social radicalism). During the 1980s, Manchette published celebrated translations of Alan Moore’s Watchmen graphic novels for a bandes-dessinée publishing house co-founded by his son, Doug Headline. In addition to Fatale, Manchette’s novels Three to Kill and The Prone Gunman, as well as Jacques Tardi’s graphic-novel adaptations of them (titled West Coast Blues and Like a Sniper Lining Up His Shot, respectively), are available in English.

“Manchette is legend among all of the crime writers I know, and with good reason: his novels never fail to stun and thrill from page one.”
—Duane Swierczynski, Author of Expiration Date

“Manchette called crime novels ‘the great moral literature of our time.’ Manchette pushes the Situationist strategy of dérive and détournement to the point of comic absurdity, throwing a wrench into the workings of their main characters’ lives and gleefully recording the anarchy that results.”
—Jennifer Howard, Boston Review

“In France, which long ago embraced American crime fiction, thrillers are referred to as polars. And in France the godfather and wizard of polars is Jean-Patrick Manchette. . . . [H]e’s a massive figure. . . . There is gristle here, there is bone.” —The Boston Globe