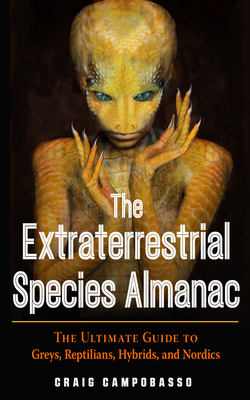 "The Extraterrestrial Species Almanac is the go to book on life in the universe."
-- George Noory, National Talk Show Host, Coast to Coast AM

Discover who the aliens are – the benevolent ones and those who mean us harm – and what they want from us. Here is the ultimate field guide to the 82 extraterrestrial species that populate the universe. Fully illustrated throughout.

This is the ultimate field guide to the 82 extraterrestrial species that populate the universe. ET enthusiast Craig Campobasso explores the origins, physical characteristics, technological and consciousness abilities, dimensional capacities, belief systems, and cosmic agendas of each of the species.

The species fall into two categories: 1) benevolent races, which function as the guardians of humanity, whose goals include helping people overcome duality, healing, and protecting; and 2) malevolent races, which are responsible for abductions, cloning, and ultimately domination.

This intergalactic expose will entertain all those interested in UFOs, aliens, ETs. Sci-fi and fantasy fans of the Marvel universe; Star Trek, Star Wars, and other popular TV shows like Ancient Aliens; Roswell, and Project Blue Book are prime targets for this book that delves deep into who the real extraterrestrials are and what they want with the people of Earth.

Craig Campobasso is an award-winning filmmaker and Emmy-nominated casting director, with a casting career that spans three decades. Craig has appeared on many radio shows, including Coast to Coast AM with George Noory, Open Minds with Regina Meredith, and Beyond Belief. He has also appeared on the History channel’s Ancient Aliens. Visit him at www.autobiographyofanet.com.

"Derived from ancient text to modern myth, The Extraterrestrial Species Almanac carries us on a fantastic journey of discovery to what might conceivably be real. You will meet angels, demons, and a wide variety of non-human intelligent entities from deep within the Earth, to the astral realm, to the vast expanse of space. The illustrations alone are magnificent!"
— Kathleen Marden, researcher, and coauthor with Stanton T. Friedman of Captured! The Betty and Barney Hill UFO Experience

"The Extraterrestrial Species Almanac is the go to book on life in the universe."
— George Noory, National Talk Show Host, Coast to Coast AM

"BRAVO for this masterpiece of work by Craig Campobasso!  He shares amazingly detailed information about a variety of extraterrestrial species who visit earth, many of whom were unknown to me even after doing 29 years of conducting a few thousand regressions to people's ET encounters. His technical information about various crafts' propulsion systems gives useful hints to engineers who are interested in space vehicle technology."
— Barbara Lamb, Psychotherapist, Hypnotherapist and Regression Therapist, author of Crop Circles Revealed, Alien Experiences and Meet The Hybrids

“Craig Campobasso has done yeoman's work in compiling reports from around the world to map out a possible cosmic species spectrum."
— Paul Hynek

Reading the Extraterrestrial Species Almanac will transport you to universal worlds and the extraterrestrials that live on them. A must read!
— Chip Coffey, internationally acclaimed Psychic and medium, as seen on Paranormal State, Psychic Kids and Kindred Spirits

"A fascinating book about extraterrestrial life in our galaxy. Will greatly help those starting out their journey to galactic awareness. Has wonderful artwork to help visualize and connect with the different civilizations out there, many of whom have been influencing our planet for millennia."
— Michael Salla, Ph.D.