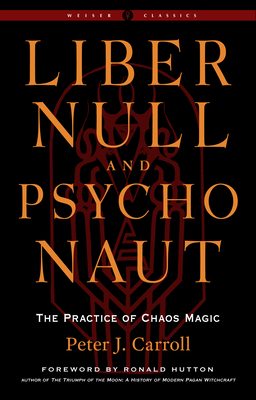 “The most original and probably the most important writer on Magick since Aleister Crowley."—Robert Anton Wilson, author of the Prometheus Rising and other works

Peter Carroll’s classic work has been profound influence on the Western magical world and on the practice of chaos magick in particular. In Liber Null and Psychonaut, Carroll presents an approach to the practice of magic that draws on the foundations of shamanism and animism, as well as that found in the Greek magical papyri, the occult works of Eliphas Levi and Aleister Crowley, and the esoteric meditative practices of classical India and China. Also very much at work in the text are 20th century scientific ideas of quantum physics and chaos theory.

The result is a profoundly original work of magical studies that also includes a selection of extremely powerful rituals and exercises for committed occultists with instructions that lead the reader through new concepts and practices to achieve Carroll’s definition of magic itself: the raising of the whole individual in perfect balance to the power of infinity.

This Weiser Classics edition is a thoroughly revised republication of Liber Null and Psychonaut, first published by Weiser in 1987, and includes a new foreword by Ronald Hutton, a leading authority on modern witchcraft and paganism.

Peter J. Carroll began his career in Magic at London University where the Chemistry proved so tedious that he settled on a pass degree in that and an unauthorized first in Magic, with Liber Null & Psychonaut emerging as his postgraduate thesis over the next several years whilst teaching high school science. He is past Grandmaster of the Magical Pact of the Illuminates of Thanateros, Chancellor of Arcanorium College, Acting Marshall of the Knights of Chaos, and a Bard of Dobunni Grove. He maintains a personal website at specularium.org.

“It may be suggested that there have so far been three leading theorists of modern Western magic. The first was Alphonse Louis Constant, alias Eliphas Levi, in the mid-19th century, who established that in order to work magic, it is necessary first to change oneself and ultimately to understand the universe. The second was Aleister Crowley, in the early 20th century, who drew on both Eastern and Western traditions to provide conceptual frameworks within which both aims might be achieved. The third has been Peter Carroll, in the late 20th century, who placed the same aims within an ultra-modern, or post-modern, context of cosmology and morality.”
— From the foreword by Ronald Hutton, author of The Triumph of the Moon: A History of Modern Pagan Witchcraft and other works

“Peter Carroll has successfully broken down many of the patterns that so many magicians cling to. Liber Null and Psychonaut—written not only for students of chaos magic, but to separate the necessary from what may be the unnecessary formula of magick—covers much new territory. Carroll has taken methods from Austin Osman Spare, shamanism, paganism, and Chaos science and synthesized them into a new system of practice.”
— The Portal