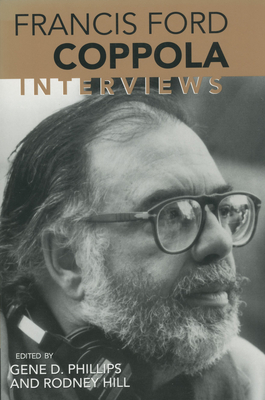 By Gene D. Phillips (Editor), Rodney Hill (Editor)
$25.00
Available from our Warehouse (Not in store currently)

Of all the American filmmakers who emerged from the 1970s, Francis Ford Coppola (b. 1939) may be the one most passionately revered by both critics and mainstream audiences. The Godfather and The Godfather: Part II are landmark epics whose shots and dialogue sequences have become wholly absorbed by popular culture. Apocalypse Now, his visionary reworking of Joseph Conrad's Heart of Darkness, remains an enduring and controversial template for all future films about the Vietnam War. Coppola's films featured pivotal roles for such actors as Robert Duvall, Al Pacino, Diane Keaton, Gene Hackman, and Harrison Ford and cemented the reputations of Marlon Brando and Robert De Niro. His production company, American Zoetrope, helped to launch the careers of directors George Lucas, John Milius, and Carroll Ballard. Francis Ford Coppola: Interviews shows Coppola to be both an intensely personal auteur and a studio-savvy Hollywood player. From the beginning of his career to the present, these conversations reveal him to be brash, candid, sensitive, and willing to engage in heated debate. He reiterates his desire to change the Hollywood system from within and talks openly about the creation of his independent film production company. Featuring interviews conducted by film critics Michael Sragow and Gene D. Phillips and the New Yorker's Lillian Ross, among others, the volume shows how Coppola has evolved from hotshot film maverick to elder statesman of American cinema.

Gene D. Phillips, S.J., is professor of English and film history at Loyola University, Chicago. He is author of several books on film, including Godfather: The Intimate Francis Ford Coppola, and is editor of Stanley Kubrick: Interviews, the latter published by University Press of Mississippi. Rodney Hill is a doctoral candidate in theater and film at the University of Kansas, and his work has been published in such periodicals as Literature/Film Quarterly and Post Script. He cowrote (with Gene D. Phillips) The Encyclopedia of Stanley Kubrick.