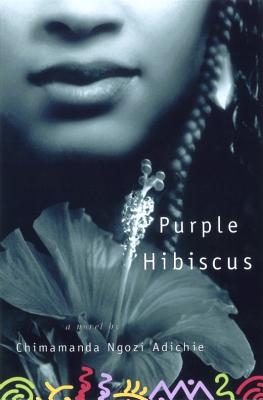 By Chimamanda Ngozi Adichie
Out of Print

Fifteen-year-old Kambili and her older brother Jaja lead a privileged life in Enugu, Nigeria. They live in a beautiful house, with a caring family, and attend an exclusive missionary school. They're completely shielded from the troubles of the world. Yet, as Kambili reveals in her tender-voiced account, things are less perfect than they appear. Although her Papa is generous and well respected, he is fanatically religious and tyrannical at home—a home that is silent and suffocating.

As the country begins to fall apart under a military coup, Kambili and Jaja are sent to their aunt, a university professor outside the city, where they discover a life beyond the confines of their father’s authority. Books cram the shelves, curry and nutmeg permeate the air, and their cousins’ laughter rings throughout the house. When they return home, tensions within the family escalate, and Kambili must find the strength to keep her loved ones together.

Purple Hibiscus is an exquisite novel about the emotional turmoil of adolescence, the powerful bonds of family, and the bright promise of freedom.

Chimamanda Ngozi Adichie grew up in Nigeria. Her work has been translated into thirty languages and has appeared in various publications, including The O. Henry Prize Stories 2003, the New Yorker, Granta, the Financial Times, and Zoetrope. Purple Hibiscus, her first novel, won the Commonwealth Writers’ Prize and the Hurston/Wright Legacy Award. Her novel Half of a Yellow Sun won the Orange Broadband Prize and was a New York Times Notable Book and a People Best Book of the Year; her novel Americanah won the National Book Critics Circle Award. Her story collection, The Thing Around Your Neck, was the winner of the 2010 Dayton Literary Peace Prize. A recipient of a 2008 MacArthur Foundation Fellowship, she divides her time between the United States and Nigeria.

“Breathtaking . . . Adichie is very much the twenty-first-century daughter of that other great Igbo novelist, Chinua Achebe.” —The Washington Post Book World

“The author's straightforward prose captures the tragic riddle of a man who has made an unquestionably positive contribution to the lives of strangers while abandoning the needs of those who are closest to him.” —The New York Times Book Review

“Prose as lush as the Nigerian landscape that it powerfully evokes . . . Adichie's understanding of a young girl's heart is so acute that her story ultimately rises above its setting and makes her little part of Nigeria seem as close and vivid as Eudora Welty's Mississippi.” —The Boston Globe

“[Her] strong, lyrical voice earns her a place on the shelf squarely next to Gabriel García Márquez, Alex Haley, and Chinua Achebe.” —The San Diego Union-Tribune