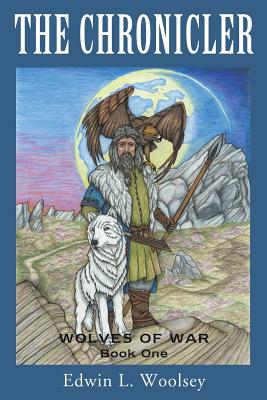 Faintly, on the fourth slow day, a strange noise was born above the water from some direction beyond sight. Invisible, no one knew the origin, but a cadence remained... like a soft muffled pulse, the twilight whisper of powerful wings, or the stroke of hundreds of oars thrusting the ocean behind them. Quite without warning, a land breeze suddenly freshened, and above their heads the first hint of sun weakly shined through the milky veil. Since the threat was behind them, Leofstan's boat was on the leading edge of the clearing and would quickly be spotted. Running into open air, a sighting was hastily made, and the consensus was Carhampton. Pulling hard against the quarter rudders, the freighter's bow smoothly turned to starboard. Seconds later, the shoreline of Somerset stretched before them. If only they could cross the intervening water ahead of their pursuers Standing on the aftercastle, Leofstan glanced over his shoulder to see a sleek single-masted ship effortlessly glide from the soupy mist. Above her deck, a giant red and white sail billowed in the wind. A horn sounded on the phantom boat and was instantly echoed by countless unseen ships traveling in her wake. In response to the signal, the drum beats immediately called for the oarsmen to quicken their pace because the hunt was on. One by one, members of the ghostly fleet appeared. Three, four, five... ten, fifteen... twenty, thirty, thirty-five elegant raiders broke from the fog bank before Leofstan stopped counting. Like wraiths from the netherworld... the dragon-headed boats edged closer in fast pursuit.