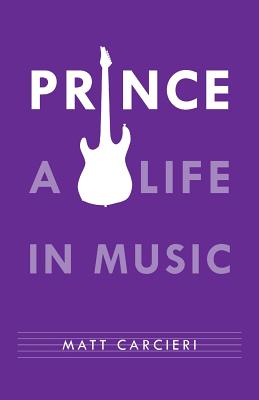 By Matt Carcieri
$13.99
Available from our Warehouse (Not in store currently)
(This book cannot be returned)

At the dawn of the eighties, small crowds of concertgoers gathered to catch a new sensation named Prince. They showed up expecting a recast of Michael Jackson, but with more chest hair. They got something altogether different.

Framed around sixty-two songs that represent the chapters of his career, this retrospective traces the life and legacy of a pioneering virtuoso. You'll follow the full arc of Prince's meteoric rise and reign, including:

- The arrival of a wunderkind, playing guitar on the 1975 track "Games"--his earliest released performance
- The soaring heights of "Purple Rain" in 1984
- The anguish captured in "Comeback" following the death of his son in 1996
- His popular resurgence, applying some "Musicology" in 2004
- His last concert performance, featuring the sublime "Black Muse" off his final album

Along the way, you'll rediscover the depth of his genius and the breadth of his impact. You'll gain new insight into his heroic spirit, the methods to his madness, and the story in his songs.

Celebrate Prince's remarkable life the way it should be celebrated: through his music.

All proceeds from this book will be donated to the Harlem Children's Zone, a nonprofit organization dedicated to ending poverty in Central Harlem.