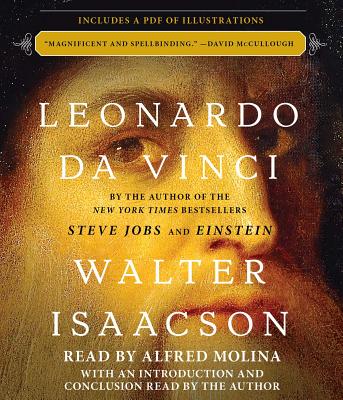 By Walter Isaacson, Alfred Molina (Read by)
This title is hard to find, please call the store for our current availability.

The #1 New York Times bestseller from Walter Isaacson brings Leonardo da Vinci to life in this exciting new biography that is “a study in creativity: how to define it, how to achieve it…Most important, it is a powerful story of an exhilarating mind and life” (The New Yorker).

Based on thousands of pages from Leonardo da Vinci’s astonishing notebooks and new discoveries about his life and work, Walter Isaacson “deftly reveals an intimate Leonardo” (San Francisco Chronicle) in a narrative that connects his art to his science. He shows how Leonardo’s genius was based on skills we can improve in ourselves, such as passionate curiosity, careful observation, and an imagination so playful that it flirted with fantasy.

He produced the two most famous paintings in history, The Last Supper and the Mona Lisa. With a passion that sometimes became obsessive, he pursued innovative studies of anatomy, fossils, birds, the heart, flying machines, botany, geology, and weaponry. He explored the math of optics, showed how light rays strike the cornea, and produced illusions of changing perspectives in The Last Supper. His ability to stand at the crossroads of the humanities and the sciences, made iconic by his drawing of Vitruvian Man, made him history’s most creative genius.

In the “luminous” (Daily Beast) Leonardo da Vinci, Isaacson describes how Leonardo’s delight at combining diverse passions remains the ultimate recipe for creativity. So, too, does his ease at being a bit of a misfit: illegitimate, gay, vegetarian, left-handed, easily distracted, and at times heretical. His life should remind us of the importance to be imaginative and, like talented rebels in any era, to think different. Here, da Vinci “comes to life in all his remarkable brilliance and oddity in Walter Isaacson’s ambitious new biography…a vigorous, insightful portrait” (The Washington Post).

Walter Isaacson, a professor of history at Tulane, has been CEO of the Aspen Institute, chair of CNN, and editor of Time. He is the author of Leonardo da Vinci; The Innovators; Steve Jobs; Einstein: His Life and Universe; Benjamin Franklin: An American Life; and Kissinger: A Biography, and the coauthor of The Wise Men: Six Friends and the World They Made. Visit him at Isaacson.Tulane.edu.

Alfred Molina's films include Spiderman II, Frida, Magnolia, Chocolat, Boogie Nights, The Perez Family, Maverick, Enchanted April, Not Without My Daughter, Raiders of the Lost Ark and Prick Up Your Ears. He has appeared extensively on British and American television, including the TV series Bram & Alice and Ladies' Man. Mr. Molina received a Tony Award nomination, a Drama Desk Award, and an Outer Critics Circle Award for his performance in Art on Broadway. He also performed on Broadway in Molly Sweeney and in Speed the Plow for the National Theatre in London.