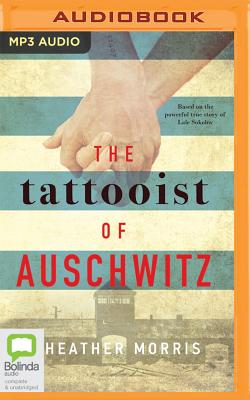 By Heather Morris, Richard Armitage (Read by)
Out of Print

“I devoured The Tattooist of Auschwitz, a powerful book based on a true story, in two sittings. Lale, a Slovakian Jew at Auschwitz-Birkenau, becomes the Tatowierer—the man responsible for tattooing every prisoner who arrives at the concentration camp. Seen by some as a collaborator, Lale must make impossible choices to keep himself and his friends alive. Incredibly, Lale tattoos the woman who will become the love of his life. The power of their love in the face of unmitigated horror makes for one of the most compelling WWII books I have ever read.”
— Carrie Deming, The Dog Eared Book, Palmyra, NY

“Holocaust survivor Ludwig (Lale) Sokolov met with author Heather Morris for three years before his death in order to recount his harrowing experiences in the Auschwitz concentration camp during WWII. His story was developed in this novel about an Auschwitz prisoner (Lale) who survives by learning to tattoo numbers onto the arms of incoming camp prisoners. After tattooing one woman, he is determined to have her as his future wife, and resolves to survive the war. Traumatic events in the camp threaten to destroy him and his girl. In the back, Morris includes photographs, a map of the camp, and a postwar follow up on Lale, his wife, his family, some of the prisoners, and his guards. Agonizing, yet triumphant.”
— Robin Allen, Forever Books, St. Joseph, MI

The Tattooist of Auschwitz is based on the true story of Lale and Gita Sokolov, two Slovakian Jews, who survived Auschwitz and eventually made their home in Australia. In that terrible place, Lale was given the job of tattooing the prisoners marked for survival--literally scratching numbers into his fellow victims' arms in indelible ink to create what would become one of the most potent symbols of the Holocaust. Lale used the infinitesimal freedom of movement that this position awarded him to exchange jewels and money taken from murdered Jews for food to keep others alive. If he had been caught he would have been killed; many owed him their survival.

There have been many books about the Holocaust--and there will be many more. What makes this one so memorable is Lale Sokolov's incredible zest for life. He understood exactly what was in store for him and his fellow prisoners and he was determined to survive--not just to survive, but to leave the camp with his dignity and integrity intact, to live his life to the full. Terrible though this story is, it is also a story of hope and of courage. It is also--almost unbelievably--a love story. Waiting in line to be tattooed, terrified and shaking, was a young girl. For Lale--a dandy, a jack-the-lad, a bit of a chancer--it was love at first sight and he determined not only to survive himself, but to ensure that Gita did, too. His story--their story--will make you weep, but you will also find it uplifting. It shows the very best of humanity in the very worst of circumstances.

Like many survivors, Lale and Gita told few people their story after the war. They eventually made their way to Australia, where they raised a son and had a successful life. But when Gita died, Lale felt he could no longer carry the burden of their past alone. He chose to tell his story.