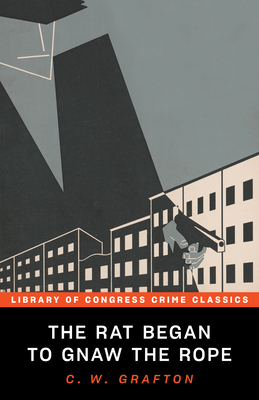 "Grafton's novel is not simply a historical curio, but a genuinely offbeat and entertaining suspense story."—The Washington Post

A timeless and propulsive story, The Rat Began to Gnaw the Rope is:

Short, chubby, and awkward with members of the opposite sex, Gil Henry is the youngest partner in a small law firm, not a hard-boiled sleuth. So when an attractive young woman named Ruth McClure walks into his office and asks him to investigate the value of the stock she inherited from her father, he thinks nothing of it—until someone makes an attempt on his life.

Soon Gil is inadvertently embroiled in a classic American scandal, subterfuge, and murder. He's beaten, shot, and stabbed, as his colleagues and enemies try to stop him from seeing the case through to the end. Surrounded by adversaries, he teams up with Ruth and her secretive brother to find answers to the questions someone desperately wants to keep him from asking.

In this portrait of America on the eve of America's entry into World War II, C.W. Grafton—himself a lawyer and the father of prolific mystery writer Sue Grafton—pens an award-winning historical crime fiction that combines humor and the hard-boiled style and will keep readers guessing until its thrilling conclusion.

LESLIE S. KLINGER is the two-time Edgar® winning editor of New Annotated Sherlock Holmes and Classic American Crime Fiction of the 1920s. He has also edited two anthologies of classic mysteries and, with Laurie R. King, five anthologies of stories inspired by the Sherlock Holmes Canon. Klinger is the series editor of Library of Congress Crime Classics, a partnership of the Library of Congress and Poisoned Pen Press/Sourcebooks. He is a former Chapter President of the SoCal Chapter of the Mystery Writers of America and lives in Malibu, California.

"A worthy addition to an outstanding new series. " — Booklist

"This book is the perfect addition to anyone’s mystery library, and I highly recommend you meet Gil Henry yourself." — Portland Book Review