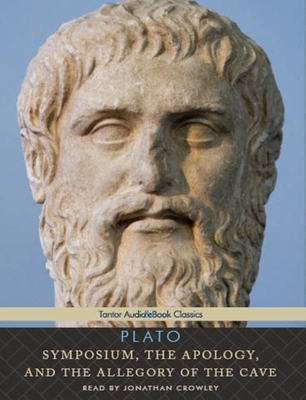 By Plato, Jonathan Cowley (Narrated by)
Out of Print

This collection brings together three of Plato's most enduring classics: the Symposium, the Apology, and the famous Allegory of the Cave from the Republic. The Symposium, a dialogue on the nature and purpose of love centered around the ideals of beauty and goodness, is arguably the deepest inquiry of its kind in Western philosophy. The Apology, Plato's account of the speech given by Socrates at his trial in 399 BC, constitutes an essential defense of Socrates' life and philosophy. Finally, the Allegory of the Cave, written as a fictional dialogue between Socrates and Plato's brother, Glaucon, is a profound commentary on the human understanding of reality. This edition is the translation by Benjamin Jowett.

Plato (427-347 B.C.) was a classical Greek philosopher and writer whose best-known works include the "Republic," the "Apology," and the "Symposium."

Jonathan Cowley is a British actor whose recording of "The Tower, the Zoo and the Tortoise" by Julia Stuart earned him an "AudioFile" Earphones Award. He has narrated many audiobooks as well as film trailers and documentaries on both sides of the Atlantic.