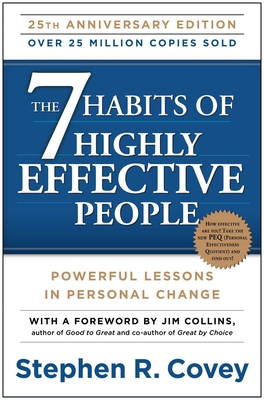 Named the #1 Most Influential Business Book of the Twentieth Century.

“Every so often a book comes along that not only alters the lives of readers but leaves an imprint on the culture itself. The 7 Habits is one of those books.” —Daniel Pink, New York Times bestselling author of When and Drive

One of the most inspiring and impactful books ever written, The 7 Habits of Highly Effective People has captivated readers for 25 years. It has transformed the lives of presidents and CEOs, educators and parents—in short, millions of people of all ages and occupations across the world. This twenty-fifth anniversary edition of Stephen Covey’s cherished classic commemorates his timeless wisdom, and encourages us to live a life of great and enduring purpose.

Recognized as one of Time magazine’s twenty-five most influential Americans, Stephen R. Covey (1932–2012) was an internationally respected leadership authority, family expert, teacher, organizational consultant, and author. His books have sold more than twenty-five million copies in thirty-eight languages, and The 7 Habits of Highly Effective People was named the #1 Most Influential Business Book of the Twentieth Century. After receiving an MBA from Harvard and a doctorate degree from Brigham Young University, he became the cofounder and vice chairman of FranklinCovey, a leading global training firm.

“Every so often a book comes along that not only alters the lives of readers but leaves an imprint on the culture itself. The 7 Habits is one of those books.”
— Daniel Pink, author of Drive and To Sell is Human

“Covey’s masterpiece, if it hasn’t changed the world, has influenced millions of readers who can and will make our planet more peaceful and prosperous and prepared and purposeful.”
— Warren Bennis

“Happily, this book has advised and encouraged us for 25 years. Now, I encourage us to be loyal and supportive for another 25 years.”
— Maya Angelou

“The 7 Habits encompasses timeless principles that can help guide any company toward success.”
— Tony Hsieh

“The 7 Habits has guided many of us on our journey through the world of business. Simple but incredibly effective. A great guide for any aspiring leader!”
— Meg Whitman, CEO of HP

“No person lasts forever, but books and ideas can endure. Stephen R. Covey’s life is done, but his work is not. It continues, right here in this book as alive today as when first written.”
— Jim Collins

“Twenty-five years after it first appeared, the wisdom of The 7 Habits is more relevant than ever. On an individual level, people are burning out, and on a collective level we are burning up the planet. So Dr. Covey’s emphasis on self-renewal and his understanding that leadership and creativity require us to tap into our own physical, mental, and spiritual resources are exactly what we need now.”
— Arianna Huffington

“Fundamentals are the key to success. Stephen Covey is a master of them. Buy his book, but most important, use it!”
— Anthony Robbins

“As the seminal work of Stephen R. Covey, The 7 Habits of Highly Effective People has influenced millions around the world to be their best selves at work and at home. It stands the test of time as one of the most important books of our time.”
— Indra Nooyi, CEO of PepsiCo

“With all the responsibilities and demands of time, travel, work, and families placed upon us in today’s competitive world, it’s a pig plus to have Stephen Covey’s The 7 Habits of Highly Effective People to refer to.”
— Marie Osmond