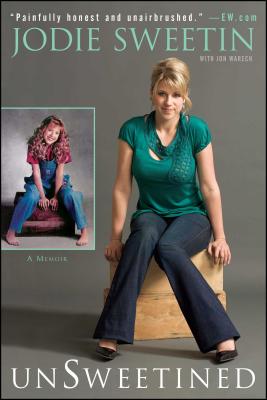 By Jodie Sweetin
$16.99
Available from our Warehouse (Not in store currently)

In this “explosive” (Us Weekly) and “brutally honest” (E! Online) memoir, Jodie Sweetin, once Danny Tanner’s bubbly daughter on America’s favorite family sitcom, takes readers behind the scenes of Full House and into her terrifying—and uplifting—real-life story of addiction and recovery.

Jodie Sweetin melted our hearts and made us laugh for eight years as cherub-faced, goody-two-shoes middle child Stephanie Tanner. Her ups and downs seemed not so different from our own, but more than a decade after the popular television show ended, the star publicly revealed her shocking recovery from methamphetamine addiction. Even then, she kept a painful secret—one that could not be solved in thirty minutes with a hug, a stern talking-to, or a bowl of ice cream around the family table. The harrowing battle she swore she had won was really just beginning.

In this deeply personal, utterly raw, and ultimately inspiring memoir, Jodie comes clean about the double life she led—the crippling identity crisis, the hidden anguish of juggling a regular childhood with her Hollywood life, and the vicious cycle of abuse and recovery that led to a relapse even as she wrote this book. Finally, becoming a mother gave her the determination and the courage to get sober. With resilience, charm, and humor, she writes candidly about taking each day at a time. Hers is not a story of success or defeat, but of facing your demons, finding yourself, and telling the whole truth—unSweetined.

Jodie Sweetin is best known for her role as Stephanie Tanner on ABC's long-running, hugely popular sitcom Full House, which still airs in syndication. She has shared her story on Good Morning America, IdeaThe Big  with Donnie Deutsch, Access Hollywood, Entertainment Tonight, and Chelsea Lately, and hosted Pants-Off Dance-Off on Fuse. She lives in California with her daughter, Zoie.