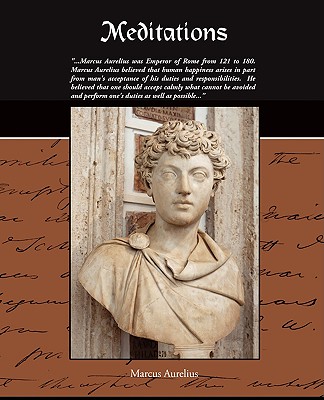 By Marcus Aurelius
This title is hard to find, please call the store for our current availability.

Marcus Aurelius was Emperor of Rome from 121 to 180. Marcus Aurelius believed that human happiness arises in part from man's acceptance of his duties and responsibilities. He believed that one should accept calmly what cannot be avoided and perform one's duties as well as possible. From the introduction " By the irony of fate this man, so gentle and good, so desirous of quiet joys and a mind free from care, was set at the head of the Roman Empire when great dangers threatened from east and west. For several years he himself commanded his armies in chief. In camp before the Quadi he dates the first book of his Meditations, and shows how he could retire within himself amid the coarse clangour of arms. The pomps and glories which he despised were all his; what to most men is an ambition or a dream, to him was a round of weary tasks which nothing but the stern sense of duty could carry him through. And he did his work well. His wars were slow and tedious, but successful. With a statesman's wisdom he foresaw the danger to Rome of the barbarian hordes from the north, and took measures to meet it. As it was, his settlement gave two centuries of respite to the Roman Empire; had he fulfilled the plan of pushing the imperial frontiers to the Elbe, which seems to have been in his mind, much more might have been accomplished. But death cut short his designs.