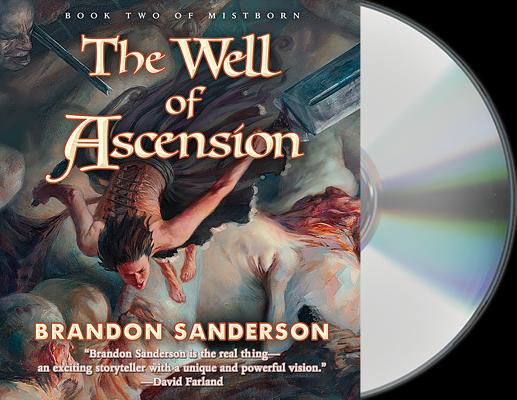 By Brandon Sanderson, Michael Kramer (Read by)
$84.99
Email or call for price.

This is book number 2 in the Mistborn series.

The impossible has been accomplished. The Lord Ruler -- the man who claimed to be god incarnate and brutally ruled the world for a thousand years -- has been vanquished. But Kelsier, the hero who masterminded that triumph, is dead too, and now the awesome task of building a new world has been left to his young protégé, Vin, the former street urchin who is now the most powerful Mistborn in the land, and to the idealistic young nobleman she loves.

As Kelsier's protégé and slayer of the Lord Ruler she is now venerated by a budding new religion, a distinction that makes her intensely uncomfortable. Even more worrying, the mists have begun behaving strangely since the Lord Ruler died, and seem to harbor a strange vaporous entity that haunts her.

Stopping assassins may keep Vin's Mistborn skills sharp, but it's the least of her problems. Luthadel, the largest city of the former empire, doesn't run itself, and Vin and the other members of Kelsier's crew, who lead the revolution, must learn a whole new set of practical and political skills to help. It certainly won't get easier with three armies – one of them composed of ferocious giants – now vying to conquer the city, and no sign of the Lord Ruler's hidden cache of atium, the rarest and most powerful allomantic metal.

As the siege of Luthadel tightens, an ancient legend seems to offer a glimmer of hope. But even if it really exists, no one knows where to find the Well of Ascension or what manner of power it bestows.

Other books by Brandon Sanderson
The Reckoners
Steelheart
Firefight
Calamity

Michael Kramer has narrated over 100 audiobooks for many bestselling authors. He read all of Robert Jordan’s epic Wheel of Time fantasy-adventure series as well as Brandon Sanderson’s The Stormlight Archive series. He received AudioFile magazine's Earphones Award for the Kent Family series by John Jakes and for Alan Fulsom's The Day After Tomorrow. Known for his “spot-on character portraits and accents, and his resonant, well-tempered voice” (AudioFile), his work includes recording books for the Library of Congress’s Talking Books program for the blind and physically handicapped.

Kramer also works as an actor in the Washington, D.C. area, where he lives with his wife, Jennifer Mendenhall (a.k.a. Kate Reading), and their two children. He has appeared as Lord Rivers in Richard III at The Shakespeare Theatre, Howie/Merlin in The Kennedy Center’s production of The Light of Excalibur, Sam Riggs and Frederick Savage in Woody Allen’s Central Park West/Riverside Drive, and Dr. Qari Shah in Tony Kushner’s Homebody/Kabul at Theatre J.

“Enjoyable, adventurous read that. . .should satisfy even easily-bored teens.” —Locus on Mistborn

“Elantris is the finest novel of fantasy to be written in many years. Brandon Sanderson has created a truly original world of magic and intrigue, and with the rigor of the best science fiction writers he has made it real at every level.” —Orson Scott Card

“Elantris . . . is marked by vivid and strongly drawn characters (including a memorable female character) and ingenious plot twists that will keep the reader turning pages. Don't miss it!” —Katherine Kurtz, New York Times-bestselling author of the Deryni series

“In this stunning debut novel [is] a completely unique world that enfolds the reader in mystery and wonder right through till the last page.” —Romantic Times BOOKReviews