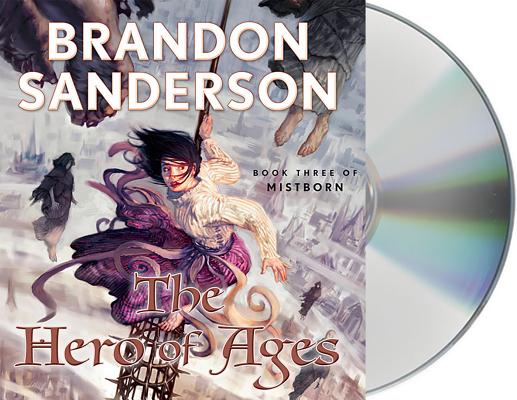 By Brandon Sanderson, Michael Kramer (Read by)
This title is hard to find, please call the store for our current availability.

This is book number 3 in the The Mistborn Saga series.

“This spectacular conclusion to the Mistborn trilogy -- in which emperor Elend Venture and his wife, the assassin Vin, try to forge critical alliances -- will keep any reader entranced and shocked when the end finally reveals itself. The series is unique and far from the formulaic structure of most modern fantasy.”
— April Gosling, Horizon Books, Petoskey, MI

Who is the Hero of Ages?

To end the Final Empire and restore freedom, Vin killed the Lord Ruler. But as a result, the Deepness--the lethal form of the ubiquitous mists--is back, along with increasingly heavy ashfalls and ever more powerful earthquakes. Humanity appears to be doomed.

Having escaped death at the climax of The Well of Ascension only by becoming a Mistborn himself, Emperor Elend Venture hopes to find clues left behind by the Lord Ruler that will allow him to save the world. Vin is consumed with guilt at having been tricked into releasing the mystic force known as Ruin from the Well. Ruin wants to end the world, and its near omniscience and ability to warp reality make stopping it seem impossible. She can't even discuss it with Elend lest Ruin learn their plans!

Brandon Sanderson grew up in Lincoln, Nebraska. He lives in Utah with his wife and children and teaches creative writing at Brigham Young University. He is the author of such bestsellers as the Mistborn® trilogy and its sequels, The Alloy of Law, Shadows of Self, and The Bands of Mourning; the Stormlight Archive novels The Way of Kings and Words of Radiance; and other novels, including The Rithmatist, Steelheart, and Skyward. In 2013, he won a Hugo Award for Best Novella for The Emperor's Soul, set in the world of his acclaimed first novel, Elantris. Additionally, he was chosen to complete Robert Jordan's Wheel of Time® sequence.

Michael Kramer has narrated over 100 audiobooks for many bestselling authors. He read all of Robert Jordan’s epic Wheel of Time fantasy-adventure series as well as Brandon Sanderson’s The Stormlight Archive series. He received AudioFile magazine's Earphones Award for the Kent Family series by John Jakes and for Alan Fulsom's The Day After Tomorrow. Known for his “spot-on character portraits and accents, and his resonant, well-tempered voice” (AudioFile), his work includes recording books for the Library of Congress’s Talking Books program for the blind and physically handicapped.

Kramer also works as an actor in the Washington, D.C. area, where he lives with his wife, Jennifer Mendenhall (a.k.a. Kate Reading), and their two children. He has appeared as Lord Rivers in Richard III at The Shakespeare Theatre, Howie/Merlin in The Kennedy Center’s production of The Light of Excalibur, Sam Riggs and Frederick Savage in Woody Allen’s Central Park West/Riverside Drive, and Dr. Qari Shah in Tony Kushner’s Homebody/Kabul at Theatre J.

“Michael Kramer brings his distinctive style to the final book of the Mistborn Trilogy. He has a familiarity with the many characters that listeners may want to share by listening to Books 1 and 2 in order to place the complex plot and characters in context…Kramer delivers quiet forward momentum in the introspective and narrative passages and increases his intensity for the skirmishes and battles.” —AudioFile Magazine