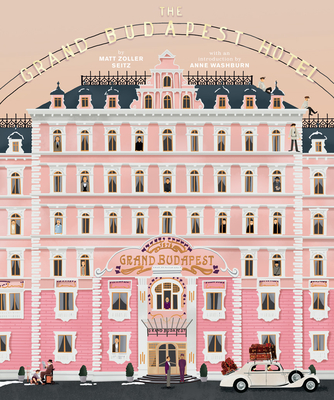 This companion to the New York Times bestselling book The Wes Anderson Collection takes readers behind the scenes of the Oscar®-winning film The Grand Budapest Hotel with a series of interviews between writer/director Wes Anderson and movie/television critic Matt Zoller Seitz.

The Wes Anderson Collection: The Grand Budapest Hotel stays true to Seitz's previous book on Anderson's first seven feature films,The Wes Anderson Collection, with an artful, meticulous design and playful, original illustrations that capture the spirit of Anderson's inimitable aesthetic. Together, they offer a complete overview of Anderson's filmography to date.
Praise for the film, The Grand Budapest Hotel:

Praise for the book, The Wes Anderson Collection:

“The Wes Anderson Collection comes as close as a book can to reading like a Wes Anderson film. The design is meticulously crafted, with gorgeous full-page photos and touches . . .”
—Eric Thurm, The A.V. Club

Anne Washburn's plays include Mr. Burns, The Internationalist, A Devil at Noon, and a transadaptation of Euripides’s Orestes. She lives in New York City and, occasionally, Buenos Aires.

“A rare follow-up that equals its predecessor, and a welcome post-script from the critic who’s become the definitive voice on all things Anderson.”
— Flavorwire

“Like Anderson’s work itself, this book’s visuals will have you coming back to it again and again.”
— Boston Globe

“More than a companion piece to the previous book—it's a veritable companion, to be taken along on exotic trips, and to be talked to when nobody is looking.”
— Philadelphia Inquirer