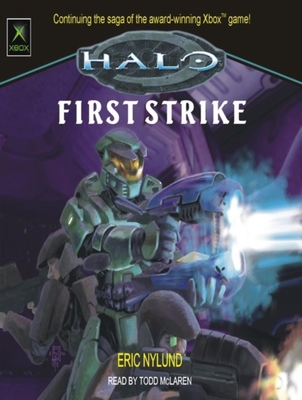 By Eric Nylund, Todd McLaren (Narrated by)
Out of Print

This is book number 3 in the Halo (Audio) series.

Halo has been destroyed, and the threat it posed to sentient life neutralized. But victory has come at a terrible cost for the UNSC. Thousands of valiant soldiers fell in the battle to prevent the alien construct from falling into the enemy's clutches. Now, everything depends on the Spartan known as the Master Chief. Yet even with the aid of the artificial intelligence Cortana, the Master Chief will be hard-pressed to rescue survivors and evade the Covenant ships patrolling the remains of Halo in debris-strewn space. Ahead lies a dangerous voyage home through a gauntlet of Covenant forces. For the sake of all, the Master Chief and his war-torn squad must not only survive but take the fight to the enemy with a decisive first strike.

Eric Nylund is the author of many novels, including "A Signal Shattered," "Crimson Skies," and "Dry Water," which was a World Fantasy Award nominee.

Former radio broadcaster Todd McLaren has been heard on more than 5,000 TV and radio commercials; narrations for documentaries on such networks as A&E and the History Channel; and films. His book narrations have earned him a prestigious Audie Award as well as a "Publishers Weekly" Listen-Up Award.