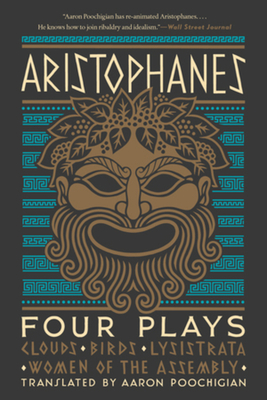 By Aristophanes, Aaron Poochigian (Translated by)
$18.95

The citizens of ancient Athens enjoyed a freedom of speech as broad as our own. This freedom, parrhesia, the right to say what one pleased, how and when one pleased, and to whom, had no more fervent champion than the brilliant fifth-century comic playwright Aristophanes. His plays, immensely popular with the Athenian public, were frequently crude, even obscene. He ridiculed the great and the good of the city, showing up their hypocrisy and arrogance in ways that went far beyond the standards of good taste, securing the ire (and sometimes the retaliation) of his powerful targets. He showed his contemporaries, and he teaches us now, that when those in power act obscenely, patriotic obscenity is a fitting response.

Aristophanes’s satirical masterpieces were also surpassingly virtuosic works of poetry. The metrical variety of his plays has always thrilled readers who can access the original Greek, but until now, English translations have failed to capture their lyrical genius. Aaron Poochigian, the first poet-classicist to tackle these plays in a generation, brings back to life four of Aristophanes’s most entertaining, wickedly crude, and frequently beautiful lyric comedies—the pinnacle of his comic art:

· Clouds, a play famous for its caricature of antiquity’s greatest philosopher, Socrates;

· Lysistrata, in which a woman convinces her female compatriots to withhold sex from their warmongering lovers unless they negotiate peace;

· Birds, in which feathered creatures build a great city and become like gods;

· and Women of the Assembly, Aristophones’s most revolutionary play, which inverts the norms of gender and power.

Poochigian’s new rendering of these comic masterpieces finally gives contemporary readers a sense of the subversive pleasure Aristophones’s original audiences felt when they were first performed on the Athenian stage.

Aristophanes was the most celebrated comic playwright in fifth-century BCE Athens.