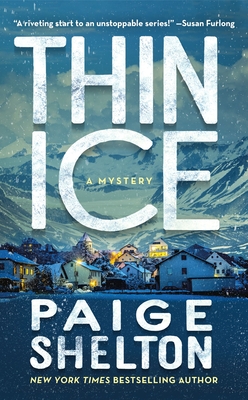 This is book number 1 in the Alaska Wild series.

A thriller writer finds herself on a real-life adventure in the deep, dark wilds of Alaska in this gripping mystery from New York Times bestselling author Paige Shelton, Thin Ice.

Beth Rivers, known to the world by her pen name Elizabeth Fairchild, has just escaped after being kidnapped by a crazed super-fan. Having thrown herself from his speeding van, Beth suffered a severe head injury and memory loss. Now, scarred and still healing, she disappears to the remote town of Benedict, Alaska—the only place Beth can be sure that no one will find her. But when she arrives, she learns that a woman named Linda Rafferty has been found dead in what looks like a suicide. Yet no one in the close-knit community quite believes that Linda killed herself, including the sheriff.

While Beth waits for her own attacker to be apprehended in the lower forty-eight, she takes it upon herself to investigate Linda’s death and write about it in the Benedict town newspaper. As rumors of murder spread, suspicion falls upon the felons staying at a local halfway house—and on Beth herself. As she fights to clear her name, and bring Linda’s killer to justice, Beth is left with more questions than answers. . .and finds that the investigation is stirring up old memories that are better left forgotten.

“[With] murder, mayhem and heroics...[and] an intriguing cast of characters.” —Anchorage Daily News

PAIGE SHELTON had a nomadic childhood, as her father's job as a football coach took her family to seven different towns before she was even twelve years old. After college at Drake University in Des Moines, Iowa, she moved to Salt Lake City. She thought she'd only stay a couple years, but instead she fell in love with the mountains and a great guy who became her husband. After many decades in Utah, she and her family moved to Arizona. She writes the Scottish Bookshop Mystery series and the Alaska Wild series. Her other series include the Farmers’ Market, Cooking School, and Dangerous Type mystery series.

"[A] riveting story with an unusual setting and cast of characters. Fans of strong amateur sleuths will admire Beth's struggle to build a new future in a remote location. Readers of Vicki Delany's "Molly Smith" books, set in British Columbia, will also enjoy." —Library Journal (Starred, Pick of the Month)

"[With] murder, mayhem and heroics...[and] an intriguing cast of characters." —Anchorage Daily News

"A page-turner with an unusual location and a coda that provides more questions than answers." —Kirkus

"Readers are left wondering up to the last exciting page what the answers are, and will eagerly await the second in this new Alaska mysteries series from the author of the Scottish Bookshop mysteries." —Booklist

"Riveting. Suspenseful and intriguing . . . Shelton's fans are sure to enjoy this compelling departure from her typical writing style." —Shelf Awareness